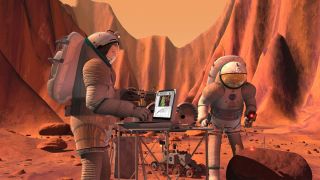 NASA aims to get astronauts to the vicinity of Mars by the mid-2030s.
(Image: © NASA/JSC)

NASA's quest to put boots on Mars in the next two decades may have just gotten a big boost.

Agency officials announced Tuesday (Sept. 16) that they've picked SpaceX and Boeing to fly American astronauts to and from the International Space Station, with operational flights scheduled to start as early as 2017.

If all goes according to plan, the two companies will end or greatly reduce NASA's dependence on Russia's Soyuz capsule for manned access to space, which has been the norm since the space shuttle fleet retired in 2011. And there should be other benefits as well, officials say. [Now Boarding: The Top 10 Private Spaceships]

"Turning over low-Earth orbit transportation to private industry will also allow NASA to focus on an even more ambitious mission — that of sending humans to Mars," NASA chief Charles Bolden said during a press briefing Tuesday.

Putting boots on Mars is NASA's primary longterm goal in the realm of human spaceflight. Indeed, the agency is working to get astronauts to the vicinity of the Red Planet by the mid-2030s, as directed by President Barack Obama in 2010. (The president also instructed NASA to send people to an asteroid by 2025, which the agency hopes to do by visiting a space rock dragged to a stable lunar orbit by a robotic probe.)

NASA aims to reach an asteroid and Mars using a mega-rocket called the Space Launch System (SLS) and a capsule named Orion, both of which are under development. The duo won't fly together until 2017 or 2018, but Orion is scheduled to launch aboard a different rocket on its first unmanned deep-space flight in December of this year.

The work with SLS and Orion "will set us up for humanity's next giant leap — the first crew to touch down on and take steps on the surface of Mars," Bolden said.

But before that happens, the Red Planet will get a number of robotic visitors — including two in the next week. NASA's MAVEN spacecraft is slated to arrive in Mars orbit on Sunday (Sept. 21) to begin studying the planet's atmosphere, while India's first-ever Mars probe, known as the Mars Orbiter Mission, should reach the planet next Wednesday (Sept. 24).

SpaceX and Boeing are splitting $6.8 billion from NASA's commercial crew program, with $4.2 billion going to Boeing and $2.6 billion to SpaceX. Both companies are building reusable, seven-passenger capsules; SpaceX's vehicle is called Dragon, while Boeing's is the CST-100.