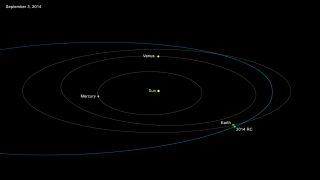 This NASA graphic shows the orbit of newly discovered asteroid 2014 RC, which makes a close approach to Earth on Sept. 7, 2014 when it passes by at a safe distance.
(Image: © NASA/JPL-Caltech)

A newly discovered asteroid the size of a house is zooming safely by Earth this weekend, and you can see live views of the space rock tonight (Sept. 6) during a series of stargazing webcasts.

Tonight, the online Slooh Community Observatory will set its sights on the near-Earth asteroid 2014 RC — which Slooh nicknamed "Pitbull" — in a one-hour webcast featuring live views of the asteroid, as well as the famed Helix nebula. The 60-foot-wide (20 meters) asteroid poses no threat of hitting Earth when it makes its closest approach on Sunday (Sept. 7), NASA officials have said.

Slooh's webcast will be streamed live at http://www.slooh.com at 10 p.m. EDT (7 p.m. PDT/0200 GMT), and include telescope views from the group's flagship observatory at the Institute of Astrophysics of the Canary Islands, off the west coast of Africa. The Helix nebula will be in the same field of view as the asteroid during the webcast, Slooh representatives said.

You can also watch the asteroid 2014 RC webcast on Space.com, courtesy of Slooh. Asteroid 2014 RC should appear as a bright fast-moving point of light in the telescope webcast. As with all stargazing events, tonight's webcast is dependent on clear weather.

By coincidence, tonight is also International Observe the Moon Night, with many events planned by amateur astronomers around the world. To celebrate the moon-observing night, the Virtual Telescope Project led by astrophysicist Gianluca in Italy will host a moon webcast tonight at 4 p.m. EDT (2000 GMT) and follow it up with an asteroid 2014 RC webcast at 6 p.m. EDT (2200 GMT).

Asteroid 2014 RC was discovered on Aug. 31 by astronomers with the Catalina Sky Survey in Tucson, Arizona. It will come within 21,126 miles (34,000 kilometers) of the Earth's surface during the Sunday flyby. The asteroid will be about one-tenth the distance between the center of the Earth and the moon when it zips by, NASA officials said.

"With a small number of observations made of 2014 RC, there is still uncertainty in its precise orbit," Slooh producer Paul Cox said in a statement. "Slooh members will be tracking the asteroid as it approaches Earth, and will submit their observations to the Minor Planet Center to enable them to better define its orbit."

Slooh's asteroid 2014 RC webcast will feature commentary by astronomer Bob Berman and host Geoff Fox. The online observatory nicknamed the asteroid "Pitbull" because of its small size and "scary demeanor," Slooh representatives wrote in a statement.

According to Slooh's Berman: "Pitbull will be too small to appear to the unaided eye. Although amateur telescopes could theoretically see it, its rapid motion will make locating this asteroid a major challenge for all but a small coterie of dedicated, serious astronomers with good star charts."

While asteroid 2014 RC is giving Earth a close shave this weekend, it is by no means the closest asteroid flyby of Earth.

The Russian meteor explosion, caused by an asteroid only slightly larger than asteroid 2014 RC, served as a wakeup call to the public to the threat of asteroid impacts on Earth. NASA scientists and astronomers around the world regularly monitor the sky for potentially dangerous asteroids.

Editor's note: If you are a seasoned asteroid tracker and capture an image of video of asteroid 2014 RC and want to share images with Space.com for a gallery or story, send images and comments to managing editor Tariq Malik at: spacephotos@space.com.

For more information on International Observe the Moon Night, and to find an event near you, visit: http://observethemoonnight.org/.