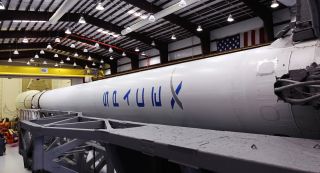 The AsiaSat 8 satellite mated to SpaceX's Falcon 9 rocket ahead of a planned liftoff on Aug. 5, 2014.
(Image: © AsiaSat)

The private spaceflight company SpaceX will blast a commercial telecommunications satellite into orbit in the wee hours of Tuesday morning (Aug. 5), and you can watch all the action live online.

A SpaceX Falcon 9 rocket is scheduled to launch the AsiaSat 8 satellite at 1:25 a.m. EDT (0525 GMT) from Cape Canaveral Air Force Station in Florida. You can watch the launch webcast here, courtesy of SpaceX, beginning at 1:10 a.m. EDT (0510 GMT).

If all goes according to plan on Tuesday, the Falcon 9 rocket will carry AsiaSat 8 to a highly elliptical geosynchronous transfer orbit. The satellite will eventually make its way to a geosynchronous orbit about 22,300 miles (35,900 kilometers) above Asia; from there, it will provide a variety of telecom services for the next 15 years, SpaceX officials said.

The spacecraft will be the most powerful member of AsiaSat's fleet, said representatives of the Hong Kong-based firm, whose full name is Asia Satellite Telecommunications Company Limited.

SpaceX has conducted reusability tests during three recent Falcon 9 launches, attempting to bring the rocket's first stage back for a soft ocean splashdown in September 2013, April 2014 and last month. These efforts are part of the company's quest to develop a fully and rapidly reusable rocket launch system, which SpaceX founder and CEO Elon Musk has said could dramatically cut the cost of spaceflight.

But the AsiaSat 8 launch will not feature a reusability test, SpaceX representatives said. The next such attempt will likely come in September with the launch of SpaceX's robotic Dragon capsule on a resupply mission to the International Space Station. That mission will be the fourth of 12 unmanned flights to the space station as part of a $1.6 billion cargo delivery deal with NASA.

The next Dragon launch will probably feature another ocean splashdown. But after that, SpaceX will likely attempt to bring the Falcon 9 first stage back softly on dry land, or on a pad in the ocean. Company representatives have said they hope to accomplish this big milestone by the end of the year.

You can track SpaceX's early-morning launch via our partner Spaceflight Now, which will provide up-to-the-minute information on the flight through its Mission Status Center. You can also follow SpaceX's Twitter page for launch updates.