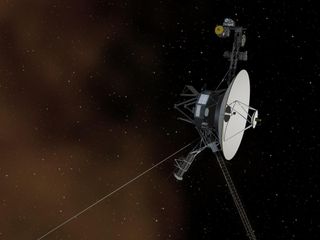 Voyager 1 made headlines around the world last year when mission scientists announced that the probe had apparently left the heliosphere — the huge bubble of charged particles and magnetic fields surrounding the sun — in August 2012.

They came to this conclusion after analyzing measurements Voyager 1 made in the wake of a powerful solar eruption known as a coronal mass ejection, or CME. The shock wave from this CME caused the particles around Voyager 1 to vibrate substantially, allowing mission scientists to calculate the density of the probe's surroundings (because denser plasma oscillates faster.) [Photo Timeline: Voyager 1's Trek to Interstellar Space]

This density was much higher than that observed in the outer layers of the heliosphere, allowing team members to conclude that Voyager 1 had entered a new cosmic realm. (Instellar space is emptier than areas near Earth, but the solar system thins out dramatically near the heliosphere's edge.)

The CME in question erupted in March 2012, and its shock wave reached Voyager 1 in April 2013. After these data came in, the team dug up another, much smaller CME-shock event from late 2012 that had initially gone unnoticed. By combining these separate measurements with knowledge of Voyager 1's cruising speed, the researchers were able to trace the probe's entry into interstellar space to August 2012.

And now mission scientists have confirmation, in the form of data from a third CME shock, which Voyager 1 observed in March of this year, NASA officials announced Monday (July 7).

"We're excited to analyze these new data," Don Gurnett of the University of Iowa, the principal investigator of Voyager 1's plasma wave instrument, said in a statement. "So far, we can say that it confirms we are in interstellar space."

Interstellar space begins where the heliosphere ends. But by some measures, Voyager 1 remains inside the solar system, which is surrounded by a shell of comets known as the Oort Cloud.

While it's unclear exactly how far away from Earth the Oort Cloud lies, Voyager 1 won't get there for quite a while. NASA scientists have estimated that Voyager 1 will emerge from the Oort Cloud in 14,000 to 28,000 years.

The craft launched in September 1977, about two weeks after its twin, Voyager 2. The probes embarked upon a "grand tour" of the outer solar system, giving the world some its first good looks at Jupiter, Saturn, Uranus, Neptune and the moons of these planets.

Like Voyager 1, Voyager 2 is still active and operational. It took a different route through the solar system and is expected to follow its twin into interstellar space a few years from now.