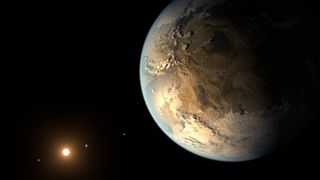 Here are five things to keep in mind about Kepler-186f:

Kepler-186f is a history-making find

Kepler-186f is the first Earth-size alien planet found in the habitable zone of its star. That means the planet, which is only slightly larger than Earth, is in the part of its star system where liquid water could exist on the planet's surface. [See artist illustrations of alien planet Kepler-186f]

"This is an historic discovery of the first truly Earth-size planet found in the habitable zone around its star," University of California, Berkeley astronomer Geoff Marcy, who is unaffiliated with the new research, said. "This is the best case for a habitable planet yet found. The results are absolutely rock solid. The planet itself may not be [rocky], but I'd bet my house on it. In any case, it's a gem."

Because of Kepler-186's location in the habitable zone around its star, the planet might be a place where life can thrive. It's possible that the planet has an atmosphere that can help keep water in liquid form on the surface, a prerequisite for life as it is known on Earth.

Kepler-186f is on the outer edge of the habitable zone, so it is possible that the planet's water could freeze. Its larger size, however, could mean the planet has a thicker atmosphere, insulating the planet, San Francisco State University astronomer and study co-author Stephen Kane said in a statement.

Although they know the alien world is in its star's habitable zone, scientists still aren't sure what the planet's atmosphere consists of, and they cannot say with certainty that Kepler-186f could support life. The planet is Earth-sized, but it might not be Earth-like.

"Some people call these habitable planets, which of course we have no idea if they are," Kane said in a statement. "We simply know that they are in the habitable zone, and that is the best place to start looking for habitable planets."

Kepler-186f is one of five planets found in the extrasolar system located about 490 light-years from Earth. The newly discovered exoplanet orbits about 32.5 million miles (52.4 million kilometers) from its sun. It takes Kepler-186f about 130 days to orbit its red dwarf star.

The other four planets orbiting the star, however, are not in that "Goldilocks zone."

"The four companion planets — Kepler-186b, Kepler-186c, Kepler-186d and Kepler-186e — whiz around their sun every four, seven, 13 and 22 days, respectively, making them too hot for life as we know it," NASA officials said in a statement. "These four inner planets all measure less than 1.5 times the size of Earth." [10 Exoplanets That Could Host Alien Life]

Scientists have described Kepler-186f as a cousin to Earth. The Kepler-186 star is dimmer than the sun, so the planet may be somewhat similar to Earth in size, but its star is not the same as the sun.

"This [Kepler-186f] is an Earth-size planet in the habitable zone of a cooler star," Tom Barclay, Kepler scientist and co-author of the new exoplanet research, told Space.com. "So, while it's not an Earth twin, it is perhaps an Earth cousin. It has similar characteristics, but a different parent."

A true Earth twin, which exoplanet hunters have yet to find, would be the same size as Earth, but also orbit a sun-like star.

Its star is cooler than the sun

The Kepler-186 star is about half the mass of the sun, and the newly discovered planet is far enough away from its star that powerful flares may not greatly affect the planet, scientists have said. Stars like Kepler-186 also have long stellar life spans.

If Kepler-186f were circling the sun, it would travel within the orbit of the planet Mercury, a planet that is not considered habitable. Because Kepler-186 is a relatively cool, red dwarf star, the planet still lies within the star's habitable zone. The star's brightness at noon on the surface of the planet is comparable to that of the sun an hour before sunset on Earth, NASA officials said.

"This planet is modestly illuminated by its host star, a red dwarf," Marcy said. "This planet basks in an orange-red glow from that star, much [like what] we enjoy at sunset."