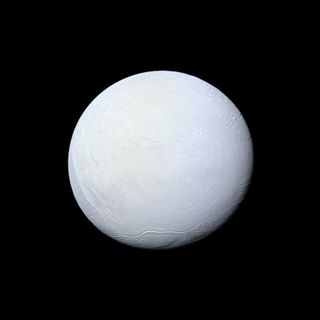 Saturn's moon Enceladus, covered in snow and ice, resembles a perfectly packed snowball in this image from NASA's Cassini mission released on Dec. 23, 2013. This view was taken by Cassini on March 10, 2012. It shows the leading side of Enceladus. North on Enceladus is up and rotated 6 degrees to the left.
(Image: © NASA/JPL-Caltech/Space Science Institute )

Astronomers are hoping that the existence of a subsurface ocean on Saturn's icy moon Enceladus will build momentum for life-hunting missions to the outer solar system.

Researchers announced their discovery of the deep watery ocean on Enceladus on Thursday (April 3) in the journal Science, confirming suspicions held by many scientists since 2005, when NASA's Cassini spacecraft spied geysers of ice and water vapor erupting from Enceladus' south pole.

The discovery vaults Enceladus into the top tier of life-hosting candidates along with Europa, an ice-sheathed moon of Jupiter that also hosts a subterranean ocean. Both frigid satellites bear much closer investigation, researchers say. [6 Most Likely Places for Alien Life in the Solar System]

"I don't know which of the two is going to be more likely to have life. It might be both; it could be neither," study co-author Jonathan Lunine of Cornell University told reporters yesterday (April 2). "I think what this discovery tells us is that we just need to be more aggressive in getting the next generation of spacecraft both to Europa and to the Saturn system once the Cassini mission is over."

Cassini arrived in orbit around Saturn in 2004 and is currently scheduled to go out in a blaze of glory in September 2017, when it will dive headlong into the giant planet's thick atmosphere.

Enceladus' geysers blast material hundreds of miles into space, offering a way to sample the moon's subsurface ocean from afar. (Researchers think the ocean is feeding the geysers, though they can't be sure of this at the moment.)

Cassini has already done some of this work with its mass spectrometer, detecting salts and organic compounds — the carbon-based building blocks of life as we know it — in Enceladus' plumes during flybys of the moon.

But Cassini's mass spectrometer can detect only relatively light organics. A follow-up mission to Enceladus should sport a more advanced and more sensitive version of this instrument that could spot a wider range of organics, Lunine said.

"You could actually do this by making flybys of Enceladus, the way that Cassini does now," he said. "I think you could learn quite a bit about the organic inventory in the plume by flying this device."

Interestingly, astronomers announced in December that they had discovered plumes of water vapor erupting from Europa's south polar region as well. So that moon's ocean could be sampled during flybys, too — perhaps by a mission called the Europa Clipper.

NASA is developing the Europa Clipper as a concept mission at the moment. Recent estimates have pegged the mission's cost at around $2 billion. That's pretty steep in these tough economic times, so a scaled-down version might have the best chance of getting it off the ground, NASA officials have said.

Enceladus and Europa aren't the only icy moons that harbor subsurface oceans; Jupiter's enormous moon Ganymede also has one, for example. But Ganymede's appears to be sandwiched between layers of ice, while the seas of Enceladus and Europa are in contact with rocky seafloors, making possible all sorts of interesting chemical reactions, researchers say.