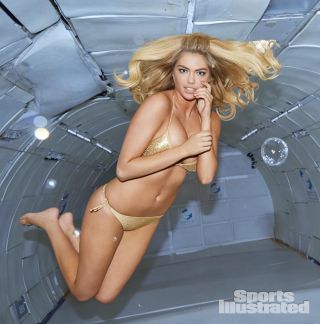 Swimsuit-clad model Kate Upton dives and floats, not in water, but through the air for a new spread in Sports Illustrated.

Upton flew on a Zero Gravity Corporation flight to model new bikini and one-piece fashions in weightlessness for Sports Illustrated's 2014 Swimsuit Issue, which hit newsstands today (Feb. 18). Upton's weightless experience shows what it might be like to model while in outer space, according to ZERO-G officials.

"The ZERO-G experience was really exhilarating for everyone involved," MJ Day, editor of the Sports Illustrated swimsuit issue, said in a statement. "We have been almost everywhere in the past 50 years with SI Swimsuit, but we have never done anything like this. It was certainly the most out-of-the-box shoot. Once again, Kate surprised us all with how she handled modeling in weightlessness." [Fun in Zero Gravity: A Weightless Photo Gallery]

In a video taken during the shoot on March 18, 2013, Upton can be seen floating through the air as photographers and the crew work to capture the model posing gracefully on the other side of the aircraft. The magazine unveiled the photos online and announced them via Twitter @SI_Swimsuit.

"One small step for swimsuit, one giant leap for mankind," someone adapting astronaut Neil Armstrong's famous words as he stepped on the surface of the moon for the first time, said at the end of the Sports Illustrated video.

ZERO-G passengers experience weightlessness as pilots flying the company's modified Boeing 727 fly in parabolic arcs while thousands of feet above Earth's surface. As the plane tilts its nose and flies on the downslope of the parabola, passengers experience about 30 seconds of weightlessness at a time. For Upton's shoot, the company flew a series of 13 weightless parabolas and four parabolas imitating lunar gravity, according to ZERO-G.

Upton floated through the plane in gold and white two-pieces and a gold lamé zip-up one piece. She also posed in droplets of weightless water while floating upside down in the plane for the magazine's 50th swimsuit issue. The weightless shoot was four years in the making, according to a passenger heard speaking in the Sports Illustrated video.

"So yeah, this happened," Sports Illustrated representatives posted on Twitter from the @SI_Swimsuit profile today.

Upton isn't the only celebrity to fly in ZERO-G's unique brand of weightlessness. Sir Richard Branson, the billionaire founder of commercial spaceflight company Virgin Galactic, took a ZERO-G flight with his family recently. Branson flew with ZERO-G in order to get a taste of weightlessness before Virgin Galactic's suborbital vehicle SpaceShipTwo makes its expected debut later in 2014.

You can see more photos and videos of Upton's weightless shoot on the Sports Illustrated website here.