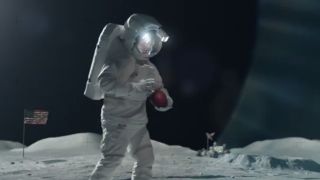 NFL star Tim Tebow is taking the Super Bowl into space today by tossing a pigskin on the moon in a T-mobile ad to air during the big game.

In the 30-second commercial during Super Bowl XLVIII, Tebow — who currently is without an NFL contract — shows off the wealth of work he's able to accomplish when not stuck with a contract. "Everyone thinks I want a contract, but without one I've done so much this year," Tebow says in the ad.

There are scenes of Tebow delivering a baby, saving puppies from a fire, fighting crime and solving world peace. Life without a contract let him "even fulfill a childhood dream," he says.

That dream? Playing football on the moon, with the American flag and a moon rover in the background. In the brief clip, Tebow throws a ball to an unseen partner (you'll see what happens to his lunar teammate at the end). It should be noted that while astronaut Alan Shepard did play golf on the moon in 1971 (a feat later repeated on the International Space Station by Russian cosmonauts in 2006), there's no word yet on when a real football game could kick off on the lunar surface.

T-mobile is not the only company to add a space spin to their Super Bowl ad this year.

The video camera company GoPro will feature the supersonic "space jump" by daredevil Felix Baumgartner in 2012. Baumgartner broke three world records when he made the highest, fastest freefall from 24 miles (39 kilometers) above Earth on Oct. 14, 2012 during the Red Bull Stratos project. Baumgartner fell so fast he broke the sound barrier, reaching Mach 1.25 — about 843.6 mph (1,357 km/h).

And while Tebow may be playing an astronaut on television, real-life astronauts are awaiting news of today's Super Bowl from space.

NASA astronauts Rick Mastracchio and Mike Hopkins are hoping the Denver Broncos beat the Seattle Seahawks in today's game at MetLife Stadium in East Rutherford, N.J. The two men are one-third of the International Space Station's six-person crew. Three Russian cosmonauts and an astronaut with the Japan Aerospace Exploration Agency round out the crew.

"My usual Super Bowl tradition is sitting in my chair watching the game in my living room or study, so obviously that's going to be quite a bit different," Mastracchio told Space.com from space Friday (Jan. 31), "but we're going to have a great vantage point from up here and I'm looking forward to watching a great game."