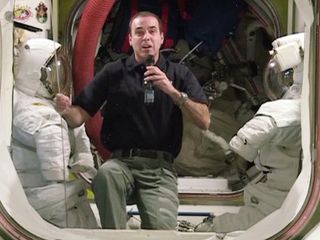 Super Bowl Sunday is an exciting day for football fans all over the United States, but NASA astronauts in space are also looking forward to the big game.

While astronauts on the International Space Station may not be able to throw a Super Bowl watch party like Denver Broncos and Seattle Seahawks fans on Earth, that doesn't mean they aren't interested in the biggest professional football game of the season. NASA astronaut Rick Mastracchio won't be able to watch the Super Bowl live on Sunday (Feb. 2), but he's still planning on participating in the football festivities, and he doesn't want to hear any game-ruining spoilers. You can watch the full sports interview with Mastracchio on Space.com  online.

"Hopefully Houston will uplink a version of it [the Super Bowl] the next day or within a few days and we'll get to watch it," Mastracchio told Space.com during a live interview today (Jan. 31). "We just have to be careful that no one tells us the score before we do that." [In Photos: NFL Stadiums That Have Hosted the Super Bowl]

Veteran astronaut Mastracchio won't be able to take part in his usual Super Bowl traditions on Earth this year. However, watching the game from space is still an appealing concept.

"My usual Super Bowl tradition is sitting in my chair watching the game in my living room or study, so obviously that's going to be quite a bit different, but we're going to have a great vantage point from up here and I'm looking forward to watching a great game."

Both Mastracchio — who hails from Connecticut — and his fellow NASA astronaut and space station crewmember, Mike Hopkins are rooting for the Denver Broncos over the Seattle Seahawks during Sunday's big game.

"Mike [Hopkins] is a big college football fan," Mastracchio said. "He watches it and tracks college football. I'm more of a professional football fan, and of course I'm a big New York Giants fan since I'm up from around that area. It would have been great to see them in the Super Bowl this year, but that didn't happen. Sounds like we [Mastracchio and Hopkins] are going to be rooting for the same team in the Super Bowl."

Astronauts on the station can also play the sports they enjoy on Earth in the weightless environment of the orbiting laboratory, but they need to do so carefully.

"We have all manner of sports equipment up here," Mastracchio, veteran of three space shuttle missions said. "I know on my last mission we actually played a little bit of baseball, kind of in slow motion. You have to be careful up here. There's a lot of scientific equipment and expensive things that you don't want to break. Every once in a while, yeah, we have some fun up here."

Sports in space do present some unique challenges, however. Floating in microgravity can be somewhat disorienting, but astronauts have special ways of keeping themselves right side up while working and playing in weightlessness.

"There is no up and down here in space. It's easy to get disoriented especially if you start working and you start putting your head inside a locker or behind a rack … A lot of the time, we float around sideways or upside down and it's no issue, but every once in a while I have to re-establish my orientation by just getting my feet on the deck."

Mastracchio flew to the station in November 2013, and he is scheduled to live and work aboard the outpost until May of this year. He and Hopkins are currently serving out their missions with fellow Expedition 38 crewmembers Koichi Wakata, of Japan, and cosmonauts Mikhail Tyurin, Oleg Kotov and Sergey Ryazanskiy.

Wakata and Tyurin will return to Earth with Mastracchio in their Russian Soyuz spacecraft, while the other three crewmembers remain on the station.