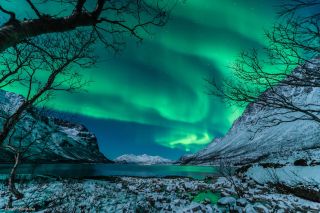 The northern lights dance across the sky, creating an ethereal glow that illuminates the darkness, in this jaw-dropping photo taken from Norway.

Photographer Harald Albrigtsen snapped this dramatic shot of green-colored auroras on Jan. 9 from Kvaløya, a mountainous island in the Norwegian municipality of Tromsø.

"[I] have been at that spot before taking pictures of the auroras, but have not been satisfied with the result," Albrigtsen told LiveScience's OurAmazingPlanet in an email.

This time, however, a fresh dusting of snow and ghostly light from a half-moon— plus a new camera lens and a bit of old-fashioned good luck — came together to create perfect conditions for the picture, he said. Albrigtsen used a Nikon D600 camera to capture the scene, and manually adjusted the settings to manage the sharp contrast between light and dark, and to control the sensitivity of the photocell in the camera. [See Dazzling Photos of the Northern Lights]

Colorful auroral displays are triggered by charged particles from the solar wind that bombard Earth's atmosphere. These dynamic particles travel along the planet's magnetic field lines, emitting brief flashes of light as they excite ions of oxygen and nitrogen in the atmosphere.

The particles are funneled to Earth's magnetic north and south poles, which explains why auroras are commonly seen in these polar regions. Yet, intense solar activity, such as geomagnetic storms or strong solar flares, can supercharge the northern lights, producing intense auroras that can sometimes be seen at high- and even mid-latitudes.

Editor's note: If you take a photo of the auroras you'd like to share for a possible story or image gallery, please contact staff writer Denise Chow at dchow@livescience.com.