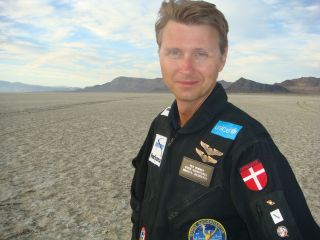 Danish entrepreneur and financier Per Wimmer is training to go to space with three different private spaceflight companies.
(Image: © Per Wimmer)

LONDON — Piloting fighter jets, floating in zero gravity and spinning at a belly-flattening speed in a centrifuge are not the things a regular tourist is asked to do before a dream holiday. But this is exactly what Per Wimmer has been doing during 13 years of waiting for his trip — to outer space.

For the 45-year-old London-based Danish entrepreneur and financier, it won't even be a once-in-a-lifetime experience. So far, he has bought three tickets from companies offering space tourism: Virgin Galactic, Space Adventures and XCOR Aerospace.

Wimmer expects to blast into the blackness overhead within the next 18 months, "on whichever rocket becomes available first," he said. When he first found out that private citizens had an opportunity to take a peek beyond Earth's surface, it took him less than 48 hours to pony up the $100,000 to sign up. [See photos of Virgin Galactic's powered test flights]

In his investment bank, Wimmer Financial, in the heart of London, Wimmer somehow looks out of place in between corporate office walls. But it's just the first impression: He manages to combine two completely different lives very successfully.

Wimmer has a boyish look and a constant chuckle, perhaps belying his daily juggling ofmillionsof dollars for many years, first on WallStreet while working for Goldman Sachs, and now at his own bank. But in between office duties, he has traveled to 66 countries, skied at the world's highest ski resort — on Chacaltaya mountain in Bolivia at nearly 18,000 feet (5,500 meters) — and even made the first-ever tandem skydive over Mount Everest, the highest point on Earth. So going to space seems to be a natural next step.

Wimmer bought his first trip, with Virginia-based Space Adventures, in 2000, just after U.S. businessman Dennis Tito managed to secure a deal with the firm to fly to the International Space Station. Tito, the very first space tourist, reportedly paid $20 million to visit the old Soviet Mir space station, a trip briefly managed at the end of the station's life by a private Russian venture called MirCorp. But when the decision was made to down the crippled Mir and crash it into the ocean, Tito successfully jumped ship and in April 2001 became the first private space explorer, on a Soyuz TM-32 rocket. [Gallery: Space Adventures' Suborbital Rocket Ride]

"I was on the launch pad in Baikonur Cosmodrome in Kazakhstan, Russia, 10 minutes before Dennis took off, which is extraordinary, and I saw him off," Wimmer told SPACE.com in an interview.

Despite being among the first customers who secured his place with Space Adventures, Wimmer said he preferred not to rush and "to hedge my bets on who were to come first with a viable rocket.” But it didn't prevent him from starting to get ready for the trip, along with other space tourists who blasted off before him.

"We just tagged along with the cosmonauts; there wasn't a particular program rolled out for space tourists," Wimmer said. He had to take the same actions astronauts and cosmonauts — and lately Chinese taikonauts — do to survive the immense stress the body is subjected to during space travel.

First, he arrived at the Yuri Gagarin Cosmonaut Training Centre in Star City, on the outskirts of Moscow. There, he had to climb inside a nozzlelike structure — the world's biggest and most powerful centrifuge, made to simulate space flight. As the centrifuge spun at breakneck speed, the future space tourist was subjected to several times the g-force on Earth. The g-force is the acceleration due to the Earth's gravity under freefall. The higher the speed, the greater the g-force experienced, and the more pressure, or tugging, felt inside the body. Astronauts, fighter jet pilots and racing drivers all feel considerable g-forces.

Wimmer experienced six times the g-force in the horizontal direction, known as 6Gx — called by fighter jet pilots as "eyeballs back" because of the enormous pressure on the eyes. He then was subjected to three times the g-force vertically, or 3Gz. This is when the pressure is downward, dubbed "eyeballs down," when blood is pushed toward your feet.

"You put on your flight suit, you get into the centrifuge, and get strapped in," Wimmer said, remembering the experience with obvious excitement. "It starts spinning around faster, and faster and faster. With those speeds, they can completely simulate every stage of a rocket launch. You really feel the g, and it's a real space experience."

Wimmer did his initial Star City training together with Mark Shuttleworth, who became the second private astronaut and the first South African in space. [Photos: The First Space Tourists]

The next stage of training was actually getting off the ground — not into space just yet, but close. Wimmer was taken to Zhukovsky air base not far from Moscow. There, a Russian fighter jet MIG-25 was waiting for him. "Same thing — you want to achieve getting this g-force exposure on your body," Wimmer said.

Wimmer climbed into the first of the two cockpits, with the pilot in the one behind him. Once up in the air, Wimmer got to fly the plane, turning around and twisting. The jet went to an altitude of 80,000 feet (24,000 meters) — higher than Concorde used to fly — and reaching speeds of about Mach 2.5-3, or 2.5 to 3 times the speed of sound.

As he was flying, Wimmer could "see the curvature of the Earth, the darkness of space, and see the sun coming in as well. It's a surreal experience because it looks like it's day and night at the same time."

Wimmer also got to pilot a Czech-made fighter plane Aero L-39 Albatros, and then he was told to swap small jets for a big Ilyushin 76 cargo airplane. What awaited him was what many Earthlings dream of but never get to experience — weightlessness.

Once at an altitude of about 8.5 miles (14 kilometers), the huge plane suddenly nose-dived down for about 30 to 40 seconds. And as it happened, everything on board became weightless, and "only your fantasy sets the limits to what you can do," Wimmer said. Then the plane turns around, you get hit by a force twice that of gravity, and the plane goes back up again.

As much as it is an incredible experience, Wimmer said that Zero-G training is essential to learn to control your movements while floating, to avoid spinning around too much and too quickly. Otherwise, it is very easy to get the equivalent of seasickness, with all the same consequences, such as vomiting — not the best thing to do in microgravity. "I would strongly recommend to anybody to do Zero-G before going into space, even if it wasn't mandatory," Wimmer said. "It's best to learn how to maneuver and deal with the temptation to do all sorts of silly things, because it is so thrilling."

In 2005, Wimmer got a phone call from Virgin Galactic. The firm offered the Dane the chance to become one of the founding private astronauts of the company's SpaceShipTwo, a commercial space vehicle currently under construction at Mojave Air and Space Port in California. Wimmer agreed, and secured his space trip for $200,000.

Virgin Galactic's spaceship will be dropped by its mother ship, a huge carrier aircraft WhiteKnightTwo, and fly horizontally at first before turning upward. To simulate the flight, future space tourists get to train at a privately run centrifuge just outside of Philadelphia, at the National Aerospace Training and Research (NASTAR) Center. More than 300 aspiring space travelers have so far made the trek there to test their bodies. [Training for Suborbital Spaceflight (A Photo Guide)]

The centrifuge is smaller that the one in Russia, but is also more modern — its flight pod has a screen that shows the Earth getting smaller and smaller, powerful sound speakers and a motion simulator. "You see what it looks like when you fly into space, and at the same time, you feel the pressure on your body. It's very real," Wimmer said.

Part of the training was also another Zero-G flight in the United States, on a Boeing 727.

A year later, in 2006, XCOR Aerospace contacted Wimmer as well and offered him a chance to be the first astronaut to fly on their Lynx spacecraft, once it's ready to take to the sky. This ticket cost him $95,000.

Normally, a future space visitor has to experience a centrifuge and a Zero-G test at least once, and pass. But Wimmer did it many times, he says, because he has been waiting for so long. "And because I am one of the founding astronauts on Virgin Galactic, we're sort of like guinea pigs," he said with a laugh. The last time he experienced a centrifuge was in 2011, and he said he will do all the stages of the training again right before he actually flies.

And when he does, his initial flights will only last half a day, taking off in the morning, coming back at lunchtime, he said. But, he adds, it'll be worth it.

"Space is kind of the ultimate frontier, and being an adventurer in the 21st century really implies getting away from Earth," he said. "Mankind has been travelling in two dimensions since ever, and most of the Earth is now discovered. So we have to get out and try the third dimension — leaving this planet."