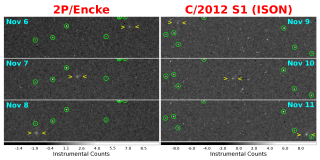 NASA's Messenger spacecraft orbiting Mercury captured these photos of incoming Comet ISON and Comet Encke as they approach their closest points to the sun in November 2013. The Comet Encke images (left) were captured between Nov. 6 and 8, while the ISON images were taken from Nov. 9 to 11.
(Image: © NASA/Johns Hopkins University Applied Physics Laboratory/Carnegie Institution of Washington/Southwest Research Institute)

A NASA probe in orbit around Mercury has spotted two incoming comets as they approach the sun this month.

The space agency's Messenger spacecraft snapped photos of Comet ISON, which scientists once billed as a potential "comet of the century," and another icy wanderer —Comet Encke — over the course of a few days this month. The Messenger team observed Comet Encke from Nov. 6 to Nov. 8 and Comet ISON from Nov. 9 to Nov. 11.

"We are thrilled to see that we've detected ISON," Ron Vervack, of the Johns Hopkins University Applied Physics Laboratory, leader of the ISON observation campaign with Messenger, said in a statement. "The comet hasn't brightened as quickly as originally predicted, so we wondered how well we would do. Seeing it this early bodes well for our later observations." [Amazing Photos of the Potentially Great Comet ISON]

Messenger mission scientists plan to continue observing Encke and ISON as they get closer to the sun and Mercury in late November.

Comet Encke is due for its closest pass with the sun — called perihelion — on Nov. 21, while ISON is set for its grazing on Nov. 28. Before Encke's perihelion, however, the comet will come within 2.3 million miles (3.7 million kilometers) of Mercury, possibly allowing Messenger scientists to get an even better look at the comet.

"By next week, we expect Encke to brighten by approximately a factor of 200 as seen from Mercury, and ISON by a factor of 15 or more," Vervack said in a statement. "So we have high hopes for better images and data."

Until now, ISON did not initially brighten the way many forecasters expected it to. However, the comet became a naked-eye object this week after a sudden outburst of activity, according to several observers.

Comet ISON is also the subject of an ongoing observation campaign bringing together observations from NASA, the European Space Agency, amateur astronomers and other space agencies around the world.

This isn't the first time ISON has been observed by spacecraft in orbit around another planet. NASA's Mars Reconnaissance Orbiter spotted Comet ISON from the Mars in late September, allowing scientists to measure ISON's brightness at the time. The Venus Express spacecraft is also expected to glimpse ISON this month or in December.

Comet Encke was first discovered in 1786 and has the shortest orbital period of any known comet at 3.3 years. It is the source of the annual Taurid meteor shower. In late November, Comet Encke will reach perihelion — the point where it is closest to the sun — marking the comet's 62nd recorded perihelion, JHUAPL officials said.

Amateur Russian astronomers using an International Scientific Optical Network (ISON) telescope spotted Comet ISON in 2012. Researchers think ISON is a "sungrazing" comet, on its trip toward the sun after being flung out from the Oort cloud — a mass of icy orbiting bodies on the outskirts of the solar system.

Editor's note: If you snap an amazing picture of Comet ISON, Comet Encke or any other night sky view that you'd like to share for a possible story or image gallery, send photos, comments and your name and location to managing editor Tariq Malik at spacephotos@space.com.