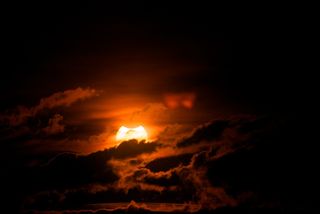 Astronomer Jay Pasachoff sent in this photo of the annular solar eclipse on May 10, 2013. He took the image from a site 43 miles (70 km) north of Tennant Creek, Northern Territories, Australia using a Nikon D600 FX and a 4000-mm Nikkor lens with a Thousand Oaks Optical filter.
(Image: © Jay Pasachoff/Williams College)

A slice of eastern North America will undergo a weird and dramatic event early Sunday (Nov. 3) morning:  a partial eclipse of the sun.

For most North American observers, the partial eclipse will coincide with sunrise.  But within a very narrow corridor that extends for 8,345 miles (13,430 kilometers) across the planet, the disks of the sun and the moon will appear to exactly coincide, providing an example of the most unusual type of eclipse: a "hybrid" or "annular-total eclipse."

During annular solar eclipse, the sun looks like a "ring of fire," while the moon and sun line up perfectly during a total eclipse. Throughout a hybrid eclipse, however, the celestial sight transitions from annular to total. [Photos: Nov. 3 Hybrid Solar Eclipse Visibility Maps & Images]

If you don't have a chance to see the eclipse from your part of the world, you can watch the cosmic rarity live on SPACE.com courtesy of the online community observatory Slooh.com. The eclipse event begins at 6:45 a.m. EST (1515 GMT) and will run throughout the entirety of the eclipse.

During the 21st century approximately 4.9 percent of all central solar eclipses — those eclipses where the moon crosses directly in front of the disk of the sun — fall into the hybrid classification.

In most cases, an annular-total eclipse starts as an annular, or "ring of fire" eclipse, because the tip of the moon's dark shadow cone — the umbra — falls just short of making contact with the Earth; so the moon appears slightly smaller than the sun producing the same effect as placing a penny atop a nickel leaving a ring of sunlight shining around the moon's edge.

Then the solar eclipse transitions to total, because the roundness of the Earth reaches up and intercepts the shadow tip near the middle of the path, then finally it reverts back to annular toward the end of the path.

However, as pointed out by the renowned Belgian eclipse calculator, Jean Meeus, the hybrid eclipse of Nov. 3 will be a special case: here the eclipse starts out as annular, then after only 15-seconds it will transition to a total eclipse, and then it remains total up to the very end of the eclipse path. The last time this happened was on Nov. 20, 1854 and the next such case after 2013 will occur on Oct. 17, 2172.

At the very beginning of this eclipse track, the tip of the umbra is literally scratching at the surface of the Earth; sitting on the borderline between annular and total it is, for all intents and purposes, a total eclipse with zero duration or ever-so-slightly more after the first 15-seconds of its interaction with our planet. [Rare Hybrid Solar Eclipse Visible This November (Video)]

And yet, whether the umbra touches the Earth's surface at the very beginning of the eclipse track – or barely misses — is somewhat irrelevant. Because the silhouette of the moon is not a perfect circle, but rather slightly prickly with mountains, so just before the transition from annular to total, the eclipse will become something neither annular nor total: for a few precious seconds it will be a broken annular.

As lunar mountains protrude onto the hairline-thin ring of the sun, it will be seen not as an unbroken ring but an irregular, changing, sparkling sequence of arcs, beads and diamonds very briefly encircling the moon: a "diamond necklace" effect!

One might witness this highly unusual sight from a particular spot in the Atlantic Ocean — probably measuring less than a mile or two in width — some 405 miles (650 km) southwest of Bermuda.  At least one group of ardent eclipse watchers from Germany hope to fly above any possible ocean cloudiness to experience this event.

Sweeping rapidly southeast, the eclipse will rapidly transition to a total eclipse; the totality path will slowly widen and the duration of totality will gradually increase, although the shadow will remain out over open ocean water for 165 minutes before finally making its first landfall at Gabon.  Along the way, the point of greatest eclipse is reached at 12:46:28 UT over the tropical eastern Atlantic, at a point 204 miles (328 km) southwest of Monrovia, Liberia.  At maximum at mid-path, totality lasts 1 minute 39.6 seconds and the path is 36 miles (57.5 km) wide. [Solar Eclipses: An Observer's Guide (Infographic)]

The umbra's first landfall comes at 13:50:21 UT at the remote Wonga-Wongue Presidential Reserve, a tract of rain forest on the coast of the central African nation of Gabon. Here, on the center line, the total eclipse will last 1 min 08 sec, with the sun standing 47 degrees high in the southwest sky.

During the next 37 minutes, the path continues out across equatorial Africa as its width and central duration again dwindle.  Sliding east-northeast, it will cut through six more African nations.  The first two are The Congo and the Democratic Republic of the Congo (known between 1971 and 1997 as the Republic of Zaire).

The path then cuts across a small slice of sparsely populated northern Uganda and northern Kenya and as it is nearing its end, crosses over into southern Ethiopia.  Finally, just before the umbra leaves the Earth at sunset over west-central Somalia at 14:27 UT, an exceedingly short total phase predicted to last for less than a second!  As was the case at the sunrise part of the path three hours and 22 minutes earlier, fortuitous observers who might have access to a clear horizon toward the west-southwest might witness the setting sun again taking on the appearance of "a diamond tiara."

Detail on the Partial Eclipse

As was noted earlier, only a slice of eastern North America will see a partial solar eclipse, while most of the rest of the continent will see nothing of this event.  If you have an atlas, draw a line starting from a point at Sudbury, Ontario south to Port St. Joe, Florida.  All places to the left (or west) of this line will not have any view of the eclipse.  Meanwhile, those localities to the right (or east) of the line will be able to see at least a part of this eclipse at sunrise, although for those places in the immediate vicinity of this line, the moon's "bite" out of the lower edge of the sun will be tantalizingly small.

For example, while the eclipse will not be visible from Detroit, only about 100 miles to the southeast at Cleveland, the edge of the moon's dark silhouette will be evident on the sun's lower limb as it rises above the east-southeast horizon at 7 a.m. EST (1100 GMT); the moon will obscure only about 15 percent of the sun's diameter, or just about 7 percent of the total disk area of the sun.  The "eclipse" -- if we can charitably call it that – will come to an end just nine minutes later. [How to Safely Photograph the Sun (A Photo Guide)]

From New England, Sunday's eclipse will mark the end of a nearly 13-year long solar eclipse drought; the last time a solar eclipse was visible from this part of the U.S. was on Christmas Day in the year 2000.  From Boston, weather permitting, a most unusual sunrise will occur at 6:22 a.m. EST, with nearly 63 percent of the sun's diameter hidden behind the moon; the sun's lower right portion will be covered.  Fifty two minutes later, the last trace of the moon will disappear at the bottom of the solar disk.

Full prediction details for many cities are available through NASA.

Remember that Daylight Saving Time ends at 2 a.m. on Sunday morning!  You must set your clocks back one hour to return to standard time.  If you fail to do this, you'll be too early by one hour for viewing the eclipse.

A Google map shows the path of the eclipse and you can zoom into it and click at any location to see your local circumstances.

Once again it needs repeating: to look at the sun without proper eye protection is dangerous.

If you live in the zone where it will be visible, no doubt early on Sunday morning the eclipse will top the local news, followed of course by the usual dire warnings to the public not to risk blindness by carelessly looking at it.  This has given most people the idea that eclipses are dangerous.  Not so. It's the sun that's dangerous — all the time. Ordinarily, we have no reason to gaze at it.  An eclipse gives us a reason, but we shouldn't.

The only recommended safe filters – those known to block invisible but damaging infrared and ultraviolet rays – are a rectangular arc welder's glass that dims the sun comfortably in visual light (shade #14 for a normal bright sun) or a metalized filter such as Mylar made specifically for sun viewing. On a telescope, binoculars, or camera, the filter must be attached securely over the front of the instrument, never behind the eyepiece. [How to Observe the Solar Eclipse Safely (Infographic)]

The safest way to watch is by means of projecting the sun's image onto a white sheet of paper or cardboard.  Poke a small hole in an index card with a pencil point and hold a second card two or three feet behind it. The projected image will undergo all the phases of the eclipse.  A large hole makes the image bright, but fuzzy; a smaller hole makes it dim but sharp.  You can also enclose this setup in a box to keep out as much daylight as possible.  For a nice, sharp image some have used a tiny pinhole pierced in aluminum foil.

A leafy tree can form a profusion of natural pinhole projectors.  Watch the dappled ground in the shadow of a tree for images depicting the eclipsed sun instead of the usual round disks.

Better yet, make use of a "pinhole mirror" by covering a pocket mirror with a piece of paper that has a ¼-inch hole punched in it, and then reflect a spot of sunlight onto a nearby wall.  The image will be one inch across for every 9 feet from the mirror.  Of course, don't let anyone look at the sun in the mirror!

Of course, telescopes and binoculars can project a much larger, sharper and brighter image of the sun which can also show any sunspot groups that may be present.  Just be sure no one looks at the sun through the instrument!

Good Luck and safe viewing to all who are in the eclipse zone … and clear skies!

Editor's note: If you snap an amazing photo of Sunday's solar eclipse or any other celestial sight that you'd like to share for a possible story or image gallery, please contact managing editor Tariq Malik at spacephotos@space.com.