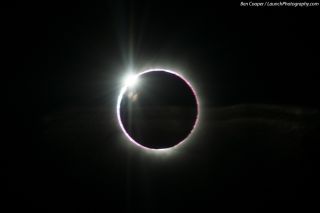 A rare solar eclipse that began as a "ring of fire" and transformed into a spectacular total eclipse of the sun amazed skywatchers from North America to Africa today (Nov. 3), and they captured the photos to prove it.

"We witnessed totality here, and it was stunning," said Paul Cox, who hosted a live webcast of the solar eclipse from Kenya for the online community observatory Slooh.com. The webcast included feeds from the GLORIA robotic telescope project and Slooh's remotely operated observatory in the Canary Islands off Africa's western coast. [See more amazing photos of the Nov. 3, 2013 solar eclipse by skywatchers]

Cox and GLORIA project eclipse chasers set up telescopes and cameras near Kenya's Lake Turkana and were prepared to witness about 14 seconds of totality as the moon crossed in front of the sun as seen from the region. A surprise sandstorm hammered the area just as the moon began its trip across the sun's face, then clouds threatened to spoil the view.

But a last-minute thinning of the clouds allowed observers to observe the solar eclipse, Cox. Cheers could be heard in the Slooh webcast during totality and the sky clearly darkened visibly.

"It was alien … it was like nothing else I've seen," Cox said in the webcast, adding that it was his first total solar eclipse experience. "It's not a normal kind of dark. This is one of the most eerie … wow."

The last hybrid solar eclipse occurred in April 2005. The next one will not occur until 2023.

For Cox, who was moved to tears by the experience, witnessing the total solar eclipse was an unforgettable experience. He and his team drove for three days to reach their observing site at Kenya's Lake Turkana.

"This is an absolute adventure for me because this is my first total solar eclipse," Cox said.

Several other eclipse-chasing expeditions on land, sea and air, including a team in Gabon, Africa led by astronomer Jay Pasachoff of Williams College, were also looking forward to observing the event. Pasachoff's team planned to use the eclipse as a way to study the sun's outer atmosphere, or corona, as well as space weather. A trio of cruise ship was also positioned along the eclipse path in the eastern Atlantic Ocean, while at least one chartered jet chased the moon's shadow across the Atlantic from Bermuda.

Veteran space and launch photographer Ben Cooper, meanwhile, was among the small team who chartered the jet from Bermuda to chase today's solar eclipse. He captured spectacular photos of the eclipse from an altitude of 43,000 feet (13,106 meters), including a spectacular view of the diamond ring effect as the moon appeared to cover the sun, despite some turbulence.

"For the first time ever, an aircraft was used to intercept an extremely short eclipse, doing so in a perpendicular crossing of the eclipse path. There was zero margin for error, with the plane required to hit a geographic point over the ocean at a precise second," Cooper wrote on his website LaunchPhotography.com. "It is also just the second time a flight to intercept any very short eclipse (just seven seconds in our case) was accomplished successfully!"

The first observers of Sunday's solar eclipse were along the eastern coasts of the United States and Canada, where the moon appeared to bite a chunk from the sunrise.

In West Orange, N.J., where an estimated 100 spectators gathered at the local Eagle Rock Reservation to watch the sunrise over New York City in the distance, the solar eclipse was visible only briefly before it disappeared into a low layer of thick clouds.

"Based on my timestamps, there was about 3 minutes where the eclipse was visible," observer Nicholas Sperling, who captured an amazing view of the partial solar eclipse over the NYC skyline, told SPACE.com in an email.

In Norfolk, Va., skywatcher James Currie photographed the solar eclipse from Ocean View Beach and reveled in the view.

"This was the first time I got to see a solar eclipse!" Currie wrote in an email.

In the United Arab Emirates, skywatcher Kristi Larson was expecting to enjoy a serene sunset over Abu Dhabi when she was surprised by the solar eclipse.

"[We] stepped outside tonight to watch the beautiful Abu Dhabi, UAE sunset and was very perplexed to see just part of the sun," Larson told SPACE.com in an email, adding that she learned of the solar eclipse by checking SPACE.com quickly. "If we would have known this was not your ordinary breath taking Abu Dhabi sunset we would have pulled out the 'good' camera, sadly we just snapped the picture with an iPhone."

Editor's note: If you snapped an amazing photo of Sunday's solar eclipse or any other celestial sight that you'd like to share for a possible story or image gallery, please contact managing editor Tariq Malik at spacephotos@space.com.