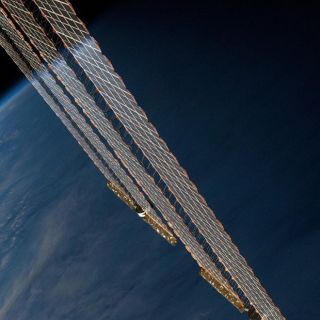 Aboard the International Space Station, NASA astronaut Karen Nyberg caught the reflection of Earth's horizon on the station’s solar arrays at sunset on Sept. 18.
(Image: © Karen L. Nyberg (via Twitter as @AstroKarenN))

Nyberg took this stunning photo while aboard the ISS. "Caught the reflection of Earth's horizon on our solar arrays at sunset," Nyberg wrote in a Twitter post on Sept. 18.

This photo is one of many fantastic images taken by the astronaut aboard the International Space Station during Expedition 36/37 in 2013. You can see more of astronaut Karen Nyberg's amazing space photos here.

Producing enough electricity to power 42 2,800 square-foot homes, ISS solar arrays are vital to the orbiting lab's operations. A recent engineering analysis reports the solar wings are degrading at a faster rate than originally planned—between 1 and 2 percent per year.

Astronaut Karen Nyberg launched to the International Space Station on May 28 on a Soyuz spacecraft alongside Italian astronaut Luca Parmitano and Russian cosmonaut Fyodor Yurchikhin. She is a flight engineer with the space station's Expedition 36-37 crew and will return to Earth on Nov. 10. In addition  to her amazing space photos, Nyberg has shared some snippets about what it is like to live in weightlessness, including the challenging task of washing her hair in space.