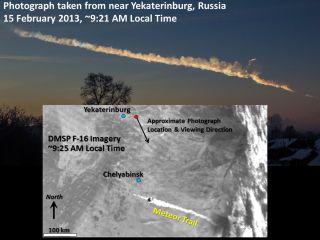 The meteor that exploded over the skies of Russia in February had key details of its fiery doom captured by satellites monitoring Earth, researchers now reveal, hinting that satellites could help uncover whether dangerous meteor swarms recur over time, scientists say.

Craters such as Chicxulub in Mexico, apparently caused by a meteor about 6 miles (10 kilometers) wide about 65 million years ago, reveal that cosmic impacts can be disastrous for life on Earth — or in Chicxulub's case, for the dinosaurs. Dangerous meteor strikes are rare in recorded history, but the fireball explosion over Chelyabinsk, Russia on Feb. 15 serve as reminders of Earth's vulnerability.

"The Chelyabinsk event is the first eyewitnessed large meteor known to cause significant property damage and injuries," said Steven Miller, a satellite meteorologist at Colorado State University who led the satellite study of the meteor detailed online Oct. 21 in the journal Proceedings of the National Academy of Sciences. [Meteor Streaks Over Russia, Explodes (Photos)]

The explosion injured more than 1,000 people and damaged structures.

"The fact that it did occur near a city underscores the real hazard posed by space objects and the need to overcome complacency and seriously consider our current deficiencies related to monitoring and potentially mitigating the threats," Miller said.

Eyes in the sky

Many witnesses recorded videos of the Chelyabinsk meteor.

"Like so many others, I was watching the late evening news when the first videos from Russia were broadcasted," Miller said. "I couldn't believe my eyes, and thankfully we had a DVR which allowed me to go back and replay it over and over, stepping through each stage of the entry. I noted the large debris trail left in the sky, and it immediately struck me that one of our many environmental satellites must have captured it."

Earth is now surrounded by many eyes in the sky that watch things such as weather. More than 10 geostationary satellites constantly hover over the equator to watch the world, and dozens more polar-orbiting satellites circle the planet from one pole to the other to provide global coverage. Miller said chances were high that one or more of these satellites captured the meteor's entry and its trail, obvious signs of which persisted for more than an hour.

"After all, we can readily see aircraft contrails all the time, and this feature was far larger than those," Miller said.

Although Miller knew a set of geostationary satellites that orbit high over the African equator might provide a highly oblique view of the event, "I was interested in seeing if any of the low-Earth-orbiting satellites may have offered a closer look." He discovered one satellite in the U.S. Defense Meteorological Satellite Program passed over to the west of the area hit within a few minutes of the meteor's entry into the atmosphere.

In "a remarkable stroke of good luck," the satellite inadvertently captured "what is perhaps the best space-based view of this historical event," Miller told SPACE.com in an email.

"We grabbed the data, and at panned-out view did not really see anything at first," Miller recalled. "But then, upon zooming in a bit, an oddly straight cloud feature popped out that did not look like typical meteorological clouds. It turned out to be the meteor trail!"

The satellite views helped the researchers estimate the fireball's trajectory through the atmosphere. Their findings were consistent with an impact on Russia's Lake Chebarkul — divers recovered a coffee-table-size chunk of the Chelyabinsk meteorite, the largest fragment unearthed yet, from the bottom of the lake on Oct. 16. [Video: Russian Meteor Fragments Found, Origin Calculated]

These new estimates were also comparable to ones inferred from the host of surface-based photographs and amateur videos of the event.

"The most important finding is that we can make use of conventional weather satellites to observe and provide quantitative information about large meteors in a way that complements and augments surface-based monitoring," Miller said.

With all the photos and videos of the Chelyabinsk event, the public may ask why satellites would be needed to watch meteor events.

"The Earth-viewing satellites certainly provide better coverage of the globe," Miller explained. "The chances of capturing such an event taken via dense video network are exceedingly remote, especially when considering the expansive oceanic regions and the tendency of significant population centers, where the odds of multiple video accounts would be higher, to gather in localized areas as opposed to broadly and evenly distributed over all land surfaces."

One reason satellite-based estimates of meteor trajectories might be critical is how there are perhaps "seasons" in which Earth is at higher risk of meteor strikes "linked to an alignment of a certain subset of larger objects with Earth's path," Miller said. "Any information that can assist scientists in pinpointing sources would be valuable."

Miller said these findings point to the need for a space-based telescope dedicated to the task of detecting and tracking smaller yet still hazardous objects in space.

"According to NASA scientists, right now, we actively track most — about 95 percent — of the doomsday asteroids that are thought to be out there, the ones having the potential to extinguish life on Earth," Miller said. "However, there exist a far larger number of smaller — less 100 meters [330 feet], or about the size of a football field or less — objects that can destroy a large region; for example, cities, if the circumstances of an object's composition and trajectory permit."

"The Chelyabinsk meteoroid was about 20 meters [65 feet], and the DA14 asteroid, which made a close pass on the same day, was about twice that size," Miller said. "It is estimated that only about half of 1 percent of these latter objects have been identified at this time, and they are not being tracked like the larger objects. Thus, we are more or less blind to what remains a serious threat."

A spaceborne platform looking out at space rather than Earth and dedicated to detecting small to moderately sized objects could have provided early warning for objects such as the Chelyabinsk meteoroid, Miller said.

"This detection-monitoring system could be coupled with a spaceborne mitigation system for addressing particular hazards," Miller added. "Provided sufficient lead time, remote deployment and minor deflection of an object's orbit would in most cases be sufficient to steer it on a course away from collision with Earth, whereas the same deflection at closer range would require much more drastic measures."

Satellite views of meteor trails could also reveal details that yield insight on a meteor's breakup properties, which give insight to its composition, Miller added.