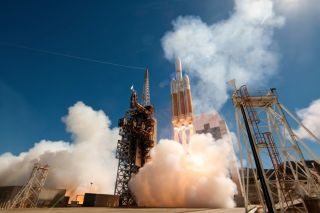 An unmanned Delta 4-Heavy rocket lifted off the pad at California's Vandenberg Air Force Base at 2:03 p.m. EDT (1803 GMT) Wednesday, carrying a classified payload to a polar orbit for the U.S. National Reconnaissance Office (NRO).

"Today's launch is dedicated to the men and women who serve for our nation's freedom," a commentator said a few minutes into the liftoff. [See more photos of today's spy satellite launch]

It's unclear what intelligence the spacecraft, which is known as NROL-65, will collect as it zips around our planet. Because of the clandestine nature of the mission, it entered a planned media blackout about seven minutes after liftoff.

"We are truly honored to deliver this critical asset to orbit," said Jim Sponnick, United Launch Alliance vice president for the Atlas and Delta Programs. "The ULA Delta 4 Heavy is currently the world's largest rocket, providing the nation with reliable, proven, heavy lift capability for our country’s national security payloads from both the east and west coasts."

The Delta 4 Heavy, which is built by ULA and first flew in 2004, is the biggest and most powerful American rocket in operation today. The 235-foot-tall (72 meters) launcher generates about 2 million pounds of thrust at liftoff, according to ULA officials.

Wednesday's launch managed to stay on schedule despite the difficulties imposed by the automatic federal budget cuts known as sequestration, which went into effect March 1. The liftoff marked the 364th flight of a Delta rocket overall, and the 24th for the Delta 4 family. Delta 4 rockets have now lifted eight payloads into space for the NRO, which builds and operates the nation's spy satellites.

While the Delta 4 Heavy is the current American heavyweight rocket champ, several other vehicles on the horizon will be even more powerful. For example, NASA is building a giant rocket called the Space Launch System (SLS) to send astronauts toward asteroids, Mars and other destinations in deep space.

The first incarnation of SLS will stand 321 feet (98 m) tall and carry up to 70 metric tons of payload. But NASA plans to develop a 384-foot-tall (117 m) "evolved" version that would be capable of blasting 130 metric tons into space, making it the most powerful rocket ever built.

The SLS is designed to launch a crew capsule called Orion, which is also in development. The duo is slated to fly together for the first time during an unmanned test run in 2017, with the first crewed mission expected to come in 2021.

Orion will be ready to fly before the SLS is up and running. Orion's first test flight is scheduled to take place in 2014, when NASA will use a Delta 4 Heavy to send an uncrewed Orion out to a distance of 3,700 miles (6,000 kilometers) from Earth — farther than any spacecraft built for humans has traveled since the Apollo program ended in 1972.

The private spaceflight company SpaceX is also working on a big rocket, which it calls the Falcon Heavy. That launcher, which is expected to fly for the first time in 2014, will produce nearly 4 million pounds of thrust at liftoff, SpaceX officials say.