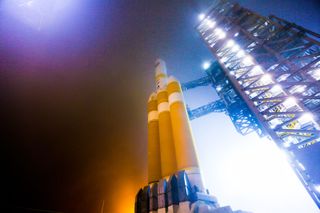 The Mobile Service Tower (MST) is rolled back at Space Launch Complex-6 in preparation for launch of a United Launch Alliance Delta IV Heavy rocket carrying the NROL-65 mission for the National Reconnaissance Office.
(Image: © ULA)

Igniting its three main engines in a staggered sequence for the first time, a United Launch Alliance Delta 4-Heavy rocket for U.S. national security is scheduled for liftoff from California today (Aug. 28).

A new strategy, being employed to reduce the hydrogen flames generated during startup of the three Aerojet Rocketdyne RS-68 main engines, will see the triple-body rocket light one engine two seconds before the other two.

Unburned hydrogen is released through the engine and hits the burnoff sparklers beneath the rocket, creating a dramatic fireball around the vehicle's base, something that has become a customary trademark for Delta 4 launches over the past decade.

But the new staggered process is designed to lessen that pre-liftoff fire before the 23-story-tall Heavy takes to the sky.

With the first engine running and working to aspirate the forthcoming hydrogen flame from the other two boosters, the center and port engines will begin their ignition process at T-minus 5 seconds and see a significant portion of the resulting fire drawn into launch table instead of rising up.

The six previous launches of Delta 4-Heavy rockets — five from Cape Canaveral and one from Vandenberg — commanded all three engines to ignite simultaneously.

The earlier Vandenberg launch in 2011, however, saw the ignition plume catch external insulation on fire as the vehicle lifted off and cleared to the pad. The flames extinguished a few seconds later and the mission proceeded successfully.

The staggered engine sequence is meant to prevent such a reoccurrence without altering the engines' operations during flight, providing a cleaner and less dramatic launch.

The debut of this procedure on the East Coast will be made next year when a Heavy launches NASA's Orion deep-space capsule on a three-orbit shakedown cruise around the Earth.

Each engine guzzles nearly a ton of propellants per second to produce 656,000 pounds of sea-level rated thrust. The upper stage, with its Aerojet Rocketdyne RL10B-2 engine, takes over about six minutes into flight. [Spaceflight Now Photos: Delta 4-Heavy on the Launch Pad]

Wednesday's mission, flying southward from Vandenberg, will place a classified payload into polar orbit for the U.S. National Reconnaissance Office, the agency responsible for operating the country's fleet for spy satellites.

The Delta 4-Heavy is America's largest unmanned rocket currently in service, capable of lofting the biggest and heftiest cargos. The mammoth vehicle is created by taking three Common Booster Cores — the liquid hydrogen-fueled motor that forms a Delta 4-Medium's first stage — and strapping them together to form a triple-barrel rocket, and then adding an upper stage. [World's Tallest Rockets: How They Stack Up]

"There's nothing bigger that the United States launches — period — in any way, shape or form, and that is absolutely amazing," said Lt. Col. Jim Bodnar, commander of the 4th Space Launch Squadron at Vandenberg.

A Heavy launching from Vandenberg is capable of putting school bus-sized reconnaissance observatories into polar orbit, a performance roughly comparable to the retired space shuttles and Titan 4 rockets.

The target launch date for this mission, designated NROL-65, has remained unchanged for months, staying on schedule despite sequestration and personnel furloughs.

"I don't want to jinx myself, but it has been an extremely smooth flow," Bodnar said. "It is a testament to the work ULA does and that the 4th Space Launch Squadron oversees. I dare say this has been one of the smoothest flows that I've seen."

A lengthy series of readiness reviews ranging from subsystems to the payload has been underway since last week. The assessments culminate with the final launch approval to be given Tuesday, Bodnar said.

"The launch business is probably one of the most risk-adverse businesses out there," Bodnar said. "The extra time the reviews take are well worth the cost because the alternative is unthinkable."

The 13-million-pound mobile service tower that provides all-level access to the rocket will be wheeled back Tuesday night ahead of the countdown.

Clocks will start ticking at 4:52 a.m. local Wednesday, followed a short time later by fueling operations for the eight cryogenic liquid hydrogen and liquid oxygen tanks aboard the vehicle.

It will be the 364th flight of a Delta rocket, the 24th for the Delta 4 family, the NRO's eighth use of the Delta 4 and ULA's 74th mission, the eighth just this year.

"Rarely do you see dry eyes when the rocket launches and you know that it's successful," Bodnar said. "The fact that we actually get to see the fruits of all of that labor is actually amazing. They're awe-inspiring."