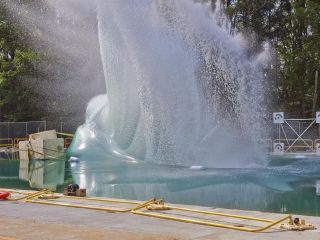 WASHINGTON — NASA wants to conduct a 2014 test flight of the Multi-Purpose Crew Vehicle (MPCV) aboard a Delta 4 Heavy, for which the agency would expect to pay about $370 million, according to Johnson Space Center Director Michael Coats.

"We'll know by next May whether we're going to be able to find the money to do this and make a commitment," Coats told Space News Nov. 17. He also said the flight would be paid for out of the MPCV budget. "[W]e can't take it out of SLS," he said, referring to the budget for Space Launch System heavy-lift rocket the agency has been directed by Congress to build.

Coats spoke with Space News here after testifying before the Senate Commerce science and space subcommittee. He was part of a panel that also included the directors of the Kennedy Space Center in Florida, and the Marshall Space Flight Center in Huntsville, Ala. Johnson, Kennedy and Marshall are responsible for developing and launching the Space Launch System (SLS) and MPCV.

Coats told lawmakers that he thought NASA was getting "a pretty reasonable deal" on the Delta 4 Heavy launch.

NASA said Nov. 8 that it wanted to stage a test flight of the Multi-Purpose Crew Vehicle, the Lockheed Martin-built spacecraft also known as Orion, in 2014 — about three years before the Space Launch System is scheduled to make its maiden flight. [Photos and video of Orion test flight]

When NASA announced the Orion test flight, it did not specify which launch vehicle would be used for the mission. However, Lockheed Martin and United Launch Alliance, the Denver-based company that builds and operates the Delta 4, disclosed in November 2010 that they were in discussions about using the Delta 4 for an unmanned Orion test flight.

A key objective of the proposed 2014 test launch would be to test whether Orion's heat shield can withstand the forces of atmospheric re-entry at about 32,000 kilometers per hour.

The White House requested about $1 billion for MPCV for 2012. A compromise spending bill awaiting votes by the full House and Senate provides $1.2 billion for the vehicle.