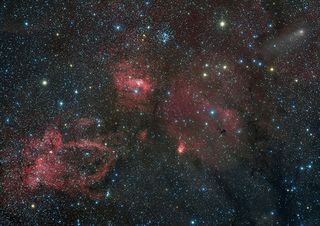 Veteran astrophotographer Terry Hancock was pleasantly surprised to learn the uninvited guest in his recent photo was not an aircraft, but rather Comet Lemmon soaring across a nebula-filled night sky.

"I was oblivious to the fact that Comet Lemmon was visiting this neighborhood," Terry Hancock wrote SPACE.com in an email. "When I processed this at first I thought I had captured aircraft lights."

Alex Gibbs of the Mount Lemmon survey in Arizona discovered Comet Lemmon, or C/2012 F6, in March 2012. Since its discovery, the comet has become increasingly brighter in the night sky as it makes its way through the solar system.

Comet Lemmon is officially known as Comet C/2012 F6 and is one of several comets that have graced the night sky in 2013. Comet Pan-STARRS (C/2011 L4) gave stargazers a celestial show earlier this year in March, and the Comet ISON — officially dubbed C/2012 S1 (ISON) — is expected to be at its best in the night sky in late November.