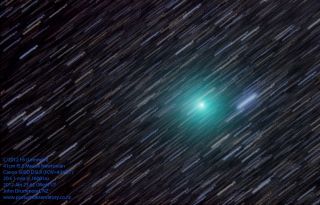 The dazzling Comet Lemmon has recently been taking center stage for those gazing up at the night sky south of the equator.

"It’s been a joy to watch it slide through crux with binoculars. It was the hit at our summer national star party! A tail isn’t obvious, but hints of one are picked up photographically. It’s a nice, bright large blob in telescopes," Drummond wrote SPACE.com in an email

"Over time it will head north and will be too far north for us New Zealanders to see it from about the end of May 2013."

Comet Lemmon, or C/2012 F6 as it is officially known, was discovered by Alex Gibbs of the Mount Lemmon survey in Arizona in March 2012. At that time, it was very faint in the sky. However, the comet has made its way into the inner solar system and is getting brighter in the sky. It will be at its closest point to the sun, or perihelion, on March 24.

Comet Lemmon is not the only comet in the night sky promising to dazzle stargazers this year. In March, the Comet C/2011 L4 (PANSTARRS) — sometimes referred to as Comet Pan-STARRS — is expected to brighten into a naked eye object that could make it a striking site in the sunset sky.

In late November the bright Comet C/2012 S1 (ISON), is expected to put on a dazzling display in the night sky. The comet will be closest to the sun on Nov. 28 and closest to Earth in late December

Editor's note: If you have an amazing photo of comets Lemmon, Pan-STARRS or ISON that you'd like to share for a possible story or image gallery, please send images and comments to managing editor Tariq Malik at spacephotos@space.com.