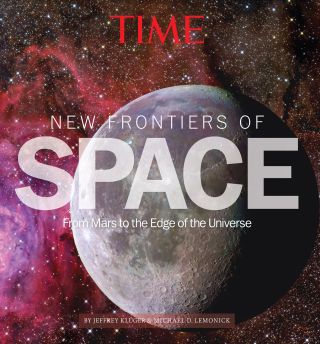 The cover of Time's "New Frontiers of Space: From Mars to the Edge of the Universe."
(Image: © Time Books)

Scientists, entrepreneurs and famous thinkers from all over the world are pushing the boundaries of what is possible in space and humanity's understanding of the final frontier.

A new book from Time Books — called "New Frontiers of Space: From Mars to the Edge of the Universe" — names 25 of the most influential people working in spaceflight, cosmology, astronomy, astrophysics and other space sciences today.

"Any kind of decision like that is made on a subjective basis, but we tried to be open-minded and really have some surprises in there," said Steve Koepp, the book's editor. "It's not only a cosmic book, it's a global one too."

The team chose SpaceX founder and CEO Elon Musk for his pioneering work in the burgeoning field of private spaceflight. MIT planetary scientist Sara Seager was also selected, to honor her hunt for "alien Earth" exoplanets.

K. Radhakrishnan, chairman of the Indian Space Research Organization, also made the list. In 2008, Radhakrishnan was integral to the mission that made India the fourth country to plant its flag on the moon. The Indian space agency plans to send an orbiter to Mars during a launch in late October this year.

"We had a continuing conversation about who those people might be," Koepp told SPACE.com of the way the influential people were chosen. "Some are probably obvious. They're practically household names … but we were going for diversity here: diversity of academic pursuit, of business, global diversity, gender diversity. We wanted to show just how many different ways you can approach the frontiers of space."

Here are seven more influential people Time chose to include:

Jill Tarter, SETI scientist — Until 2012, Tarter served as the director of the Center for SETI (Search for Extraterrestrial Intelligence) Research at the SETI Institute in Mountain View, Calif., but today, she is focusing on fundraising for the Allen Telescope Array — a set of 42 radio dishes that search for signs of extraterrestrial intelligence.

Carolyn Porco, Saturn imager — Porco leads the imaging science team for NASA's Cassini spacecraft in orbit around Saturn. Recently, she asked people around the world to smile at Saturn as Cassini took a photo of Earth from its position around the ringed wonder.

Neil deGrasse Tyson, director of the Hayden Planetarium — From searching for Superman's home planet to writing irreverent Twitter posts about astrophysics, Tyson tries to bring space science to the masses from his post at the American Museum of Natural History.

Liu Yang, Chinese astronaut — Liu became the first Chinese woman to fly to space in 2012 when she launched aboard the Shenzhou 9 spacecraft.

Steve Squyres, Spirit and Opportunity rovers — Squyres serves as the principal investigator for NASA's Mars Exploration Rover mission, which has been active on the Red Planet since 2004. He helps to command the Opportunity rover, which is still roaming nearly 10 years after touching down. (Opportunity's twin, Spirit, was pronounced dead in 2011.)

You can purchase the book online or in stores to see the full list. For more details on the book, visit: http://www.time.com/spacediscoveriesbook