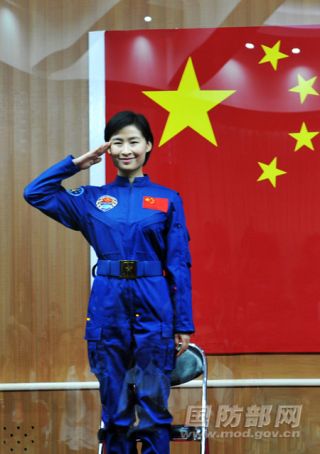 China's first female astronaut Liu Yang, an Air Force major, salutes to reporters during a press conference on the eve of her June 16, 2012 launch with two crewmates on the Shenzhou 9 mission to the Tiangong 1 space lab.
(Image: © China Ministry of National Defense)

NAPLES, Italy - On June 16, 33-year-old Liu Yang became the first Chinese woman to reach space when she and two male crewmates blasted off aboard the Shenzhou 9 spacecraft.

Two days later, the three astronauts — or taikonauts, as they're known in China — hooked up with the robotic Tiangong 1 module, pulling off China's first-ever manned space docking. Another manned mission to Tiangong 1 — called Shenzhou 10 — is planned for next year, and Liu may be selected for that flight as well.

On Wednesday (Oct. 3), Liu spoke at the 63rd annual International Astronautical Congress in Naples, Italy. She said she was astonished by the beauty of Earth as seen from space, and that she was pleasantly surprised by the toy panda that had been left aboard Tiangong 1 by the ground crew.

During the Shenzou 9 briefing at the Congress and at a press conference shortly afterward, Liu answered journalists’ questions. Here are some of the questions she was asked, and what she said in response. [Female Space Explorers (Infographic)]

Was your flight an important achievement for Chinese women?

Liu: I am so honored to be performing this space mission on behalf of all the Chinese spacewomen and earn their trust and support.

When is your next mission?

What duties do you have and what training are you undertaking for the next two to three years?

Liu: My duty now is to do more training and preparation work, and my additional duty is to exchange experiences with others and learn through each other because I have the flight experience. I think now more of my duties are to train for future missions.

Were you aware that other people were in orbit along with you, aboard the International Space Station?

Liu: I think we could sense all the others in the universe, and during our mission I think we all sensed being in space with other astronauts in orbit. We also sent our greetings to them [the International Space Station crew] when we were in orbit.

What do you think of this conference?

Liu: We can learn and exchange from each other, and the Congress is a good channel through which people can communicate with common goals. The Congress pushes forward the development of the technologies that will benefit mankind. It’s a very meaningful event.

Cooperation is the theme of this meeting. Why is cooperation important?

How did your training prepare you for the microgravity environment in space?

Liu: Our training schedule is reviewed and certified by a lot of expertise, and we got a lot of useful information. I feel all my training is very practical and meaningful and has helped me have a better mission. Performing tai chi in space — it is comfortable, we got more outer space chi.