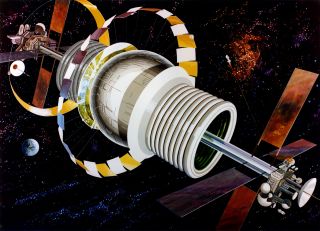 An artist’s depiction showing the exterior of Bernal Spheres space colony from space colony summer studies conducted at NASA Ames in the 1970s. The Bernal Sphere is a point design with a spherical living area for a population of 10,000.
(Image: © NASA Ames Research Center / Rick Guidice)

Life in a space colony would be different from life on Earth.

Gravity might be a thing of the past, everyone could drink distilled urine, and a whole generation of Earthlings may grow up without ever having set foot on the surface of the planet. At the moment, those ideas are still firmly set in the realm of science fiction, but in the next 1,000 years, new technologies could be developed that would enable humanity to colonize space.

While a self-sustaining space station colony might be a long way off, scientists are still working to design and perhaps even build a space station that goes beyond low-Earth orbit. [See Photos of NASA Space Colony Designs from the 1970s]

"It extends the capability of humans to be out in space away from Earth," Paul Bookout, project manager of the concept demonstrator for Deep Space Habitat at NASA's Marshall Space Flight Center in Huntsville, Ala., said of building a space station in deep space. "For example if you could go to a near-Earth asteroid and you had a habitat out there, you could stay extended periods of time … and do research on the asteroid, bring samples back in, continuing work out there instead of trying to bring small samples back to Earth."

"Elysium" — a new science fiction film about a world in which only the rich and powerful can live in a seemingly utopic space station orbiting Earth — is the newest in a long line of movies dealing with the science of space living.

"The premise is totally believable to me," Mark Uhran, a former assistant associate administrator for the International Space Station at NASA Headquarters, said of the movie. "When I took a look at the Elysium station, I thought to myself, that's certainly achievable within this millennium."

How to build a station

Engineers and researchers need to overcome a few major obstacles before a sustainable space station colony is a viable possibility, Uhran said.

"It's clear that the number-one challenge is chemical propulsion," Uhran told SPACE.com. "We learned an incredible amount with [the International Space Station] and we demonstrated that we have the technology to assemble large structures in space. What we need are rockets that can get material out of the Earth's gravity well and deliver it to whatever location the future space station is assembled." [NASA Visions of Giant Space Colony Explained (Infographic)]

The supplies needed to create the space station don't necessarily have to come from Earth, Uhran said. Asteroids and other planetary bodies like the moon could provide elements needed to build the station. However, moving the heavy supplies to their proper place in orbit from any cosmic hub would still be a challenge for current propulsion systems.

Nuclear propulsion — rockets powered by nuclear reactions — could be a more efficient way of taking supplies to the station, but that kind of technology isn't advanced enough to use currently. It's possible that scientists will find a way to create a better propulsion system sometime in this millennium or the next one, Uhran said.

Engineers will also need to create a closed-loop life-support system that can recycle most of the materials used in the colony to make the space station sustainable indefinitely. Currently, the International Space Station operates at about a 70 to 80 percent closed loop system for water.

"In the habitats that we're designing [at Marshall Space Flight Center in Huntsville, Ala.] at the moment, we're using the [International Space Station]-based systems, but there is research ongoing on making the systems more and more closed-loop so that you can minimize the amount of air and water supplies you have to carry up to support the crew," said David Smitherman, study lead for research into deep space habitats and designs at Marshall. "There are some advanced ecosystems development work that's ongoing that's trying to do an even better job than what we have on the space station."

Radiation is also a major concern for astronauts living onboard a space station. Crewmembers on the International Space Station today are blasted with about 40 times more potentially dangerous space radiation during a six-month stint on the orbiting outpost than the average person gets in a year on the ground. Those numbers would only get worse the deeper an astronaut travels into space.

Comfort in a space station

One deep-space travel issue that scientists probably wouldn't need to worry about is isolation, experts say. By building a colony that could support more than just a small crew, astronauts will probably have enough social activity to prevent isolation-related issues in space.

That doesn't mean that the space station shouldn't at least be somewhat comfortable. Scientists working with NASA's Deep Space Habitat program are developing ways to create a comfortable living space for astronauts aboard a space station in deep space.

"On one end, you have crew quarters and then it has a little hallway that opens up into a larger living area," Bookout told SPACE.com. "We're trying to change up the versatility; instead of living in a box, it's something like your house."

One station design the scientists at Marshall are looking into is somewhat like Skylab, the first American space station that was inhabited for 171 days between 1973 and 1974. The station could be ideal for deep space living because it provides a somewhat comfortable living situation through design.

A deep space station could be built using NASA's Space Launch System — a heavy launch rocket in development that could deliver astronauts to deep-space destinations including Mars. The station would be made from a tank used on the rocket that would be about the size of a two-story house, much larger than the rooms in the International Space Station.

Design a station, win a prize

People from all walks of life can get involved in NASA's mission to create a sustainable deep space habitat, planners say.

The space agency sponsors the eXploration Habitat (X-Hab) Academic Innovation Challenge for university students. The X-Hab competition asks students for ideas about the best ways to craft a space station that could exist for an indefinite amount of time in deep space.

"One of the nice things about the X-Hab project is that we have been able to fund student work on a variety of habitat designs, which stimulates us and gives us ideas about ways to lay them out and innovative things to incorporate," Smitherman said.