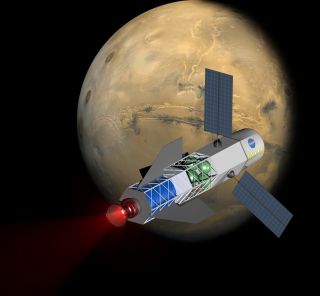 A concept image of a spacecraft powered by a fusion-driven rocket. In this image, the crew would be in the forward-most chamber. Solar panels on the sides would collect energy to initiate the process that creates fusion.
(Image: © University of Washington, MSNW)

Rockets that harness the power of nuclear fusion may provide the next big leap in humanity's quest to explore the final frontier, NASA's science chief says.

"It's transformative," Grunsfeld said last month after his presentation at Maker Faire Bay Area in San Mateo, Calif., a two-day celebration of DIY science, technology and engineering. "You could get to Saturn in a couple of months. How fantastic would that be?" [Superfast Propulsion Concepts (Images)]

For a little perspective: NASA's robotic Cassini spacecraft blasted off in October 1997 and didn't enter Saturn orbit until July 2004.

Traditional chemical propulsion systems can get humans to destinations in deep space, but with a lot of travel time. For example, a roundtrip manned mission to the vicinity of Mars, which NASA aims to execute by the mid-2030s, would require about 500 days of spaceflight.

Speeding up the trip to Mars, or anywhere else, is desirable for a number of reasons — to minimize the radiation dose astronauts receive during the journey, for example, and to save money on consumables such as food and water.

So NASA and researchers around the world have been investigating advanced propulsion technologies, including space-bending "warp drives," enormous solar sails and matter-antimatter engines. Nuclear fusion is perhaps the most promising of these possibilities, at least in the relatively near term, proponents say.

Fusion rockets would harness the energy released when the nuclei of two or more atoms combine. Our sun and other stars are fusion-powered, converting this energy to light; the same principle also gives hydrogen bombs their immense destructive power.

NASA has funded several early-stage fusion ideas recently via a program called NIAC (NASA Institute for Advanced Concepts). One of these groups, led by scientists at the University of Washington, recently calculated that a fusion rocket could make it possible to get astronauts to Mars in as little as 30 days.

Fusion rockets likely won't be powering a spacecraft anytime soon, however. Researchers still haven't developed a fusion reactor here on Earth that generates more energy than it takes in, after all, despite billions of dollars devoted to the effort over several decades.

But studying how to make fusion work for spacecraft engines could help chip away at the problem, Grunsfeld said, potentially bringing to reality a technology famous for always being "30 years away."

"That could accelerate the research for fusion reactors here on Earth," he said.