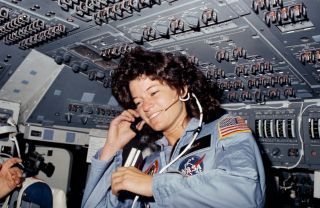 The U.S. space agency is in need of more women among its ranks, NASA's second-in-command said last week during a panel on women in space.

"Even though we have a flat budget at best, these days we have about 1,000 new hires per year," NASA associate administrator Lori Garver said July 23 during a NASA-sponsored Google+ Hangout commemorating the life of Sally Ride, America's first woman in space. "Right now 37 percent of those have been women. We need to increase that."

To encourage more women to work at NASA, and in the fields of science, technology, engineering and math (STEM) in general, Garver said the science community must show how STEM careers are valuable. [Women in Space: A Gallery of Firsts]

"I do feel we have not done enough to explain careers in a way that shows how they really do help advance humanity," Garver said, pointing out that women go into medical fields at levels equal to or greater than men, yet the gender balance is extremely lopsided for fields like engineering.

"The latest data and surveys show females care greatly about improving the environment around them, and they care about helping people, and what we need to do is make that translation to show them the misconception that science is not a humanistic effort," said physicist Karen Flammer, who co-founded the education outreach organization Sally Ride Science with Ride herself.

Many of the women on the panel, which included an astronaut, an astrophysicist, and the manager of NASA's effort to reach out to women, spoke of Sally Ride's influence on their own careers.

"I was in college when Sally flew and frankly I don't think I really paid attention to the space shuttle program until STS-7, [Ride's first flight]," Garver said. "She had a great influence on me. She shaped my life in this program."

"Role models do, in fact, matter," Garver added. "We've all in a way been touched by Sally."

"Until I met Sally I had this impression of what being an astronaut was like," NASA astronaut Cady Coleman said during the event, adding that she assumed it was a career for tough, fighter pilot types who were very different from herself. Even now, as part of NASA's astronaut Corps, she sometimes sees reminders of that mentality.

"I still see this picture around the Johnson Space Center, of the seven original astronauts standing around a fighter plane, and nothing in that picture makes it think it could be me," Coleman said.

Coleman spoke of her difficulty in becoming certified for spacewalks, which requires fitting into special spacesuits that come only in medium, large and extra-large. She is currently NASA's smallest person qualified to wear a spacesuit, and some female astronauts are too small to fit, she said. What's more, it takes extra effort for a person of small stature to move and maneuver in the suit, meaning it's often harder for her to operate in it than her male counterparts.

Garver said the decision to make the suits in only those large sizes was made by male NASA officials before she joined the agency.

Having female leadership at NASA has also changed things like the maternity leave policy, which has become more accommodating to women employees in recent years, said Mamta Patel Nagaraja,  program manager of the Women@NASA program.

"Life gets really complicated. Having women like Lori up in those higher positions that are really supportive" makes all the difference, she said.

While all the panelists agreed more female representation at NASA is needed, they said some gains had already been made. For the first time this year, Garver pointed out, women made up half of NASA's newest astronaut class announced earlier this year. Four out of eight new recruits announced last month are women.