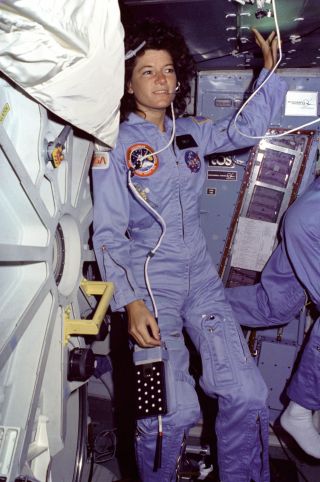 Sally Ride, the first American woman to fly in space, died Monday (July 23) at the age of 61.

Ride made history when she launched aboard the space shuttle Challenger on the STS-7 mission in 1983. She became only the third woman to ever travel in space, after Soviet cosmonauts Valentina Tereshkova in 1963 and Svetlana Savitskaya in 1982.

Ride traveled into space once more in 1984, as a member of the STS-41G crew on the space shuttle Challenger. Over the course of her career, Ride logged a total of 343 hours in space.

Sally Ride's death came after 17 months of battling pancreatic cancer. Here are some tributes to Sally Ride from astronauts, scientists, historians, industry officials and other luminaries:

Michelle and I were deeply saddened to hear about the passing of Sally Ride. As the first American woman to travel into space, Sally was a national hero and a powerful role model. She inspired generations of young girls to reach for the stars and later fought tirelessly to help them get there by advocating for a greater focus on science and math in our schools. Sally’s life showed us that there are no limits to what we can achieve and I have no doubt that her legacy will endure for years to come. Our thoughts and prayers go out to Sally’s family and friends.

Sally Ride broke barriers with grace and professionalism — and literally changed the face of America's space program. The nation has lost one of its finest leaders, teachers and explorers. Our thoughts and prayers are with Sally's family and the many she inspired. She will be missed, but her star will always shine brightly. [Sally Ride: 1st American Woman in Space (Pictures)]

Sally was a personal and professional role model to me and thousands of women around the world. Her spirit and determination will continue to be an inspiration for women everywhere.

I am surprised and saddened by the news of Sally Ride’s passing. She was such a wonderful role model and source of inspiration to me. People around the world still recognize her name as the first American woman in space, and she took that title seriously even after departing NASA.

She mentored me several times during my astronaut career, leaving me with many cherished memories. She never sought media attention for herself, but rather focused on doing her normally outstanding job. Her “Sally Ride Science” programs have reached thousands of middle school girls, giving them the confidence to stay focused on math and science, even when the mass media message was otherwise. She also played a notable role in both the Challenger and Columbia accident investigations. Sally left us too soon. Godspeed Sally, you will be greatly missed.

From time to time, we come across people who are so passionate about their cause that it is contagious and you cannot help but to follow them and watch them as they make their mark on the universe. Sally was one of those unique individuals. Her passion was our youth and helping them on their quest for knowledge. Sally was the spark that ignited curiosity and imagination in them. If there is such a thing as the "Right Stuff," Sally would be a poster child for it. She was and will always be a role model to me and a hero for everyone, but especially all the women across the globe.

The selection of the 1978 Astronaut Class that included Sally and several other women, had a huge impact on my dream to become an astronaut. The success of those women, with Sally paving the way, made my dream seem one step closer to becoming a reality.

Sally lived her life to the fullest, with boundless energy, curiosity, intelligence, passion, commitment, and love. Her integrity was absolute; her spirit was immeasurable; her approach to life was fearless.

Sally was a physicist, the first American woman to fly in space, a science writer, and the President and CEO of Sally Ride Science. She had the rare ability to understand the essence of things and to inspire those around her to join her pursuits.

Sally was a very private person who found herself a very public persona. It was a role in which she was never fully comfortable. I was privileged to be a part of her life and be in a position to support her as she became the first American woman to fly in space.

While she never enjoyed being a celebrity, she recognized that it gave her the opportunity to encourage children, particularly young girls, to reach their full potential. Sally Ride, the astronaut and the person, allowed many young girls across the world to believe they could achieve anything if they studied and worked hard. I think she would be pleased with that legacy. [Video: Sally Ride's Memories of Historic Spaceflight]

Sally was an American hero and a historic space explorer. Her legacy will be in the millions of kids that she inspired by her mission and in the educational efforts that followed. It will also be in the positive changes and insights she brought to American space policy through her continued service to the country.  She was committed, intelligent, serious about our biggest challenges, and had a wonderful sense of humor. Our nation and planet have lost an incredible human being.

Sally Ride's impact on the U.S. space program, and indeed on this country overall, was pervasive. From her pioneering flight as the first U.S. woman in space to her efforts in recent years to stimulate young girls to stay with the study of science, engineering, and math, she was a model citizen. Sally contributed her keen intelligence to many key studies, ranging from the Challenger and Columbia accident investigations to examinations of alternatives paths for the nation in space.

So sorry to hear of the loss of my friend and fellow astronaut Sally Ride . You will always be an inspiration for women and space.

I remember clearly the signs at the Cape during STS-7..."RIDE SALLY RIDE AND ALL YOU GUYS CAN GO ALONG TOO"... All of us rode with Sally on that flight. Her passion and dedication to education and to inspiring women to become scientists and engineers will be sorely missed.

Very saddened by death of #SallyRide. Her indelible mark on history only starts with her as 1st US Woman in Space.

As luck & fate would have it. I inherited #SallyRide's desk at NASA. I hope that I can leave as positive an impact on the world as she.

Ed Lu, former astronaut and B612 Foundation chairman and CEO

Sally contributed to humanity in two big ways, both as an astronaut/explorer, and through her work encouraging girls to get involved in science. She'll be missed.

I met Sally Ride when we served on the Review of US Human Spaceflight Plans Committee, in 2009. It was an honor meeting an icon, and working with her. She made significant contributions to the committee, and was a hard-working and energetic person. I was especially impressed with her commitments to helping young girls achieve in science, technology, engineering and math programs through her Sally Ride Science Camps. She will be missed.

The space community, teachers and students around the world have lost a great friend and role model. Sally was more than a trailblazing astronaut and brilliant scientist. She was deeply concerned about the state of education in the United States, and worked tirelessly to reach students, especially at-risk young women, with programs filled with hope and inspiration -- to enable our next generation of explorers.

Whether on board a space shuttle, inside a corporate board room, or with students at one of her Sally Ride Science events, she was a motivational and inspiring leader. She was a friend to all explorers, and she will be deeply missed.

She was highly significant in a lot of ways. As the first American woman to fly in 1983, that's significant in and of itself. Beyond that, she was involved in both Columbia and Challenger accident investigations, and was critical to the recovery from both of those accidents.

Her report on leadership at NASA in the aftermath of Challenger was really significant. That's where she laid out, really for the first time, the idea that had been floating for a while — mission to planet Earth, which is now Earth science. It had not been a major part of NASA's efforts prior to that time, but has become incredibly significant since. She's an enormously significant voice for children's investigation in science and technology, and especially for girls. It's quite a tragedy we've lost her."

Sally was an icon in the history of space exploration. She realized the great honor associated with being the first American woman in space and used her notoriety to promote education. Her influence in inspiring students to pursue careers in science and technology is one of her many extraordinary achievements. In her role as an astronaut and as an educator Sally changed the lives of countless young people and that will be her legacy.

Over the last 9 years I was fortunate to work with Sally on the Columbia Accident Board, as a sponsor for Sally Ride Science, and most recently as a reviewer of my book. Sally was kind-hearted, gracious, a strong role model for young women in science and a thoughtful scientist. I am profoundly grateful to have known her and had the opportunity to work with her over the years.

Today, the Coalition for Space Exploration is saddened to say goodbye to our dear friend and colleague Sally Ride - physicist, astronaut, educator and American hero.  After her trailblazing career in space, Sally dedicated her life to the mission of opening the world of science to girls, with the Sally Ride Science Academy and Camps.

She was a role model, a mentor and one of our most effective champions for STEM education.

Our sorrow in her passing is only exceeded by our deep respect and gratitude for her contributions to our nation and our future.