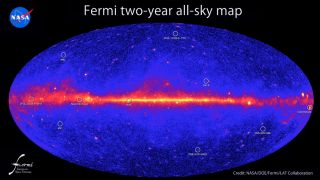 This all-sky image, constructed from two years of observations by NASA's Fermi Gamma-ray Space Telescope, shows how the sky appears in gamma-ray light. Brighter colors indicate brighter gamma-ray sources. A diffuse glow fills the sky and is brightest along the plane of our galaxy (middle). Discrete gamma-ray sources include pulsars and supernova remnants within our galaxy as well as distant galaxies powered by supermassive black holes.
(Image: © NASA/DOE/Fermi LAT Collaboration))

An intriguing hint of a certain type of gamma-ray light at the center of the Milky Way might be a product of elusive dark matter — or it might not be. For the past several years, scientists have debated whether the light is really there, and what it means. Now, researchers are petitioning the management team of NASA's Fermi Gamma-Ray Space Telescope, the observatory that saw the light, to change its observing strategy to determine once and for all whether the signal really exists.

However, even if there are extra gamma-ray photons coming from the center of the galaxy, scientists are a ways from knowing whether the photons were made by dark matter.

Theories suggest some mysterious form of matter that can't be seen or touched is rife throughout the universe, making its presence known only through its gravitational pull. The leading theory behind this dark matter posits that it's made of a new kind of fundamental particle called a WIMP (weakly interacting massive particle). [Graphic: Dark Matter Explained]

Because WIMPs are thought to be their own antiparticle (antimatter is a mirror version of normal matter that annihilates ordinary particles when it meets them), if two WIMPs were to collide, they would destroy each other on the spot. These explosions, which should be more common toward the center of the galaxy where dark matter would be densest, would likely create new particles that would give rise to gamma-ray photons of a precise energy. That light is what Fermi might have seen.

"It's pretty ambiguous — it could be a statistical fluke, it could be a systematic effect or it could be a true signal," said Christoph Weniger, an astrophysicist at the University of Amsterdam in the Netherlands. "Right now, there are signs of all three."

Weniger is lead author of a recent white paper suggesting the Fermi telescope spend more time looking toward the center of the Milky Way in search of this feature. The paper was submitted in response to a call for alternative Fermi observing strategies by the telescope's project scientist Julie McEnery, an astrophysicist at NASA's Goddard Space Flight Center in Greenbelt, Md.

Fermi was launched in June 2008, and has been surveying the entire sky evenly since then. Although one of its goals is to learn more about dark matter, the observatory is used for many areas of research, including spinning stars called pulsars and glowing supermassive black holes in other galaxies, both of which emit gamma-ray light.

Weniger's proposal recommends that Fermi observe the center of the galaxy whenever it is visible, which would more than double the rate at which it collects data from this part of the sky. However, the intent is not to divert too much time away from other projects.

"We are very concerned about having a negative impact on other people's science projects," said Harvard University astrophysicist Doug Finkbeiner, a co-author of the white paper. "We're just really trying to do what's right for the project."

Fermi is funded to continue operating through at least 2016, potentially offering plenty of time to settle the question of the galactic center light.

"We think if we started a new observing strategy immediately, we could have the answer by 2015," Finkbeiner told SPACE.com.

Armed with more data from the center of the galaxy, the scientists hope to determine if there really is an excess of gamma-ray light in the particular energy range — 130 gigaelectron volts (GeV) — that Fermi has seen hints of so far.

It's possible that these hints are just a statistical fluctuation, and with more data, the excess will go away. It's also possible that Fermi's data really do show an excess of these photons, but that they're due to some artifact in the instrument — a systematic error.

"We've already gone through a lot of hypotheses about what could be wrong with the instrument, and all of them fail in some way or another," Finkbeiner said. "Something unlikely has happened here. Either a very unlikely statistical fluctuation, some kind of problem in the instrument that is masking itself in some unlikely way, or we have 130 GeV photons. They're all actually very unlikely, but one of them still happened."

"In my opinion, the most important issue is to rule out the possibility that the line feature in the data might be instrumental in origin," said Simona Murgia, an astrophysicist at the University of California, Irvine and a member of the Fermi collaboration galactic center analysis team. "Additional data from modified observations would help understand this better."

The situation is also complicated by a second, apparently unrelated, potential indication of dark matter in the Fermi data. In addition to 130-GeV photons, scientists have seen an excess of lower-energy gamma rays in the range of 2-3 GeV. While this signal is strong enough to rule out the chance that it's a statistical fluctuation, it could also be caused by regular astrophysical sources, such as pulsars.

But if the 130-GeV signal persists and can't be attributed to a systematic error, then astronomers may have found the first proof that dark matter exists, and a look at what it's made of.

"If it is a real line, it would be a 'smoking gun' of dark matter," said University of California, Irvine astrophysicist Kevork Abazajian, who's studied the other, lower-energy 2-3 GeVFermi gamma-ray signal. The proposed observing strategy would not shed much light on his feature, but it would help resolve the higher-energy signal, Abazajian said. [No WIMPS in Space? - NASA Scans For Dark Matter | Video]

"They make a pretty compelling case," said Dan Hooper, an astronomer at the Fermi National Accelerator Laboratory in Batavia, Ill., and the University of Chicago who has also studied the lower-energy gamma-ray signal. "It would be great to have some more data from this direction of the sky, and the downsides of their proposed strategy seem minimal."

Hooper said he was skeptical that the signal Weniger and his team are chasing is actually dark matter, but that more data would help settle the matter.

Other projects are currently chasing after dark matter in different ways. The Alpha Magnetic Spectrometer (AMS), a particle detector attached to the outside of the International Space Station, is also looking for signs of dark-matter annihilation explosions in space. The first data from that experiment, announced in April, show a hint of evidence that could be caused by dark matter, but the findings are very preliminary. And if they do end up pointing toward dark matter, they suggest a different mass of WIMP from the Fermi results, so the two results aren't necessarily complementary.

Other experiments hope to catch dark-matter particles directly, on the very rare occasions they do collide with normal matter particles. Such detectors — which include the XENON Dark Matter Project in Italy, the LUX (Large Underground Xenon) experiment in South Dakota, and the SuperCDMS (Cryogenic Dark Matter Search) experiment in Minnesota — are buried deep underground, where almost nothing but dark matter can reach them. None has found definitive results so far.

The team behind the new Fermi proposal said it's likely what Fermi's seeing isn't dark matter — but they'd rather know for sure.

"I think you always hope a little bit, but then you have to remember: You're a scientist; you just want to get to the truth," Finkbeiner said. "If the truth is there's a 130-GeV WIMP, then that will be fantastic; we'll understand something new about physics."

And if that's not the case, then they'll know it's time to move on, he said. At least they will have left no stone unturned.