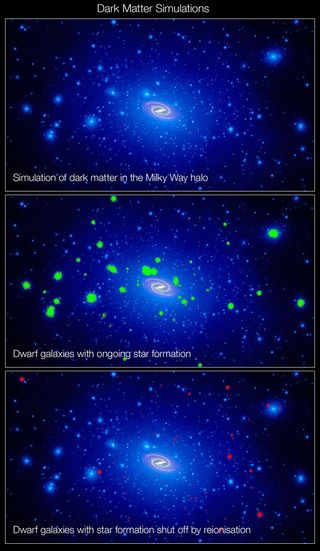 DENVER — Hints of dark matter, the mysterious stuff that makes up perhaps 85 percent of the matter in the universe, may have been observed by scientists.

But researchers are far from saying they've discovered the source of dark matter.

The new results come from the Super Cryogenic Dark Matter Search (SuperCDMS), which takes place deep underground in the Soudan mine in northern Minnesota.

In this subterranean laboratory, researchers chill germanium and silicon to incredibly cold temperatures (near absolute zero, which is minus 459.67 degrees Fahrenheit, or minus 273.15 degrees Celsius). The chilled environment is ideal for directly detecting dark matter particles. If one passes through, hitting a frigid atom nucleus, it releases charge and heat that the scientists can detect with supersensitive instruments.

The experiment detected three events that might suggest a weakly interacting massive particle, or WIMP, passing through. WIMPs are one possible candidate that explain dark matter, which emits no light but interacts with the universe through its gravity.

But physicists are precise and standards for claiming a discovery are even higher than these probabilities.

A prereview version of the paper reporting this region of interest is available on the physics preprint website arXiv.

If the signals turn out to be evidence of WIMPs as dark matter, they suggest a particle with a mass of about 8 giga-electronvolts, or GeVs (one GeV equals 1 billion electron volts).

That mass is consistent with earlier CDMS results as well as another dark-matter-hunting experiment called CoGeNT at the U.S. Department of Energy's Pacific Northwest National Laboratory, Cabrera said, but it contradicts preliminary results seen at the international XENON Dark Matter Project, a major experiment located in Italy.

Researchers are zeroing in on dark matter from multiple angles. Earlier this month, NASA scientists announced that they'd seen hints of dark matter from indirect measurements taken on the International Space Station. The detector, the Alpha Magnetic Spectrometer, detected 400,000 positrons, which are the antimatter "twins" of electrons. These particles may have been created when dark matter particles collided and annihilated each other.