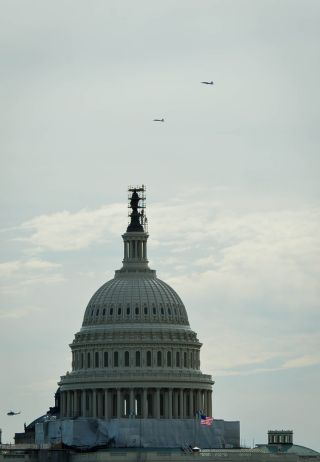 Two NASA T-38 training jets are seen as they fly near the U.S. Capitol, Thursday, April 5, 2012, in Washington. NASA, in cooperation with the Federal Aviation Administration, conducted training and photographic flights over the DC metropolitan area.
(Image: © NASA/Paul E. Alers)

Scientists will visit Capitol Hill Tuesday (May 21) to testify before Congress about what it will take to send humans to Mars.

A hearing before the U.S. House of Representatives' Science, Space and Technology Committee is scheduled for 2 p.m. EST, and will feature astronomers known for their expertise in moon and Mars exploration, as well as a former NASA official and a co-founder of The Planetary Society, a nonprofit dedicated to space exploration.

President Obama has challenged NASA to send astronauts to Mars by the mid 2030s, with an earlier goal of landing on an asteroid in the 2020s. Scientists say both ambitions are challenging, and will require new technologies — as well as steady funding — to come to fruition.

The space agency has already begun work on a new rocket called the Space Launch System (SLS) and a new crew capsule called Orion to transport astronauts to deep space. More work will be needed on additional technologies, such as improved shielding from space radiation, and advanced navigation and communications equipment, as well.

"Interest in sending humans to Mars I think has never been higher," Bolden said May 6. "We now stand on the precipice of a second opportunity to press forward to what I think is man's destiny — to step onto another planet."

Witnesses presenting at Tuesday's Congressional hearing will include:

The panel is organized by the Subcommittee on Space, and will be held at the 2318 Rayburn House Office Building. You can watch the Mars mission hearing webcast live on SPACE.com, or directly from the House webcast feed here.