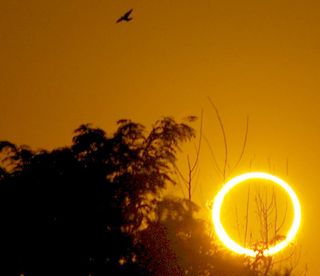 Skywatcher Joel Dykstra sent this photo of the solar eclipse taken on May 20, 2012. He writes: "Here are some eclipse pictures I took from my backyard in Roswell, NM with a Pentax K100 D digital SLR and some older manual telephoto lenses. I did not use any filters or special devices. These were taken between 6:45-7:30 mountain time."
(Image: © Joel Dykstra)

The moon will block part of the sun today (May 9) to create a potentially amazing "ring of fire" and you can watch the celestial sight live online.

The "ring of fire" solar eclipse — known as an annular solar eclipse — will be viewable (weather permitting) over certain areas of Australia and islands in the Southern Pacific Ocean where the local time will be Friday (May 10). If you don't happen to live in those parts of the world, however, you can still catch the cosmic show.

The online Slooh Space Camera will host a free webcast featuring live views of the eclipse today, beginning at 5:30 p.m. EDT (2130 GMT). You can watch it live on SPACE.com, courtesy of Slooh. [See Spectacular Photos of a 'Ring of Fire' Solar Eclipse ]

"The precise line up, or syzygy, of the sun, moon and Earth have intrigued primitive cultures for millennia," Bob Berman, contributing editor and monthly columnist for Astronomy Magazine, said in a statement. "Here are the two most important and influential celestial bodies, so far as life on Earth is concerned, and on that day we can actually watch their clockwork motions. We observe firsthand as the Moon orbits around us at 2,250 miles per hour, showing off its speed as it centrally crosses the disk of the sun. It's pretty dramatic."

Slooh will stream in live video of the solar eclipse as seen by an observatory in Australia. Expert commentators, like Berman, will be on hand to discuss the event as well. The space camera will also host a live feed from the Prescott Solar Observatory to show viewers shots of the sun from Arizona. You can also follow the solar eclipse live via Slooh's iPad app and its website: http://events.slooh.com/

This eclipse also marks the second solar eclipse in six months for skywatchers in Australia.

Every eclipse is a unique event, Jay Pasachoff, an astronomer at Williams College in Mass. and the chair of the International Astronomical Union's working group on eclipses said. Pasachoff travelled to Australia earlier in the week to prepare for the eclipse with his 10-person team. This eclipse marks the 56th solar eclipse that Pasachoff has witnessed in person.

"The beauty of an eclipse is that each one is so memorable," Pasachoff told SPACE.com. "They [annular eclipses] aren't as exciting as total eclipses but it will still be fun to see anyway."

During this kind of eclipse, the moon covers about 95 percent of the sun, but that doesn't mean  the sky will be noticeably darker, experts have said. Special camera and telescope filters, protective eyewear and other means of defense should be implemented to safely view the eclipse in person.

"The eclipse in Australia begins shortly after sunrise and makes its way over the Pacific Ocean," officials from Slooh said in a statement. "Because the moon is very nearly at a point farthest from Earth, known as apogee, it appears too small to fully cover the sun, leaving a thin ring of sunlight or 'annulus' — known as the 'Ring of Fire.'"

Weather permitting, the Hawaiian Islands, the southern Philippines, eastern Indonesia, parts of Australia, parts of Papua New Guinea and a sliver of New Zealand will be treated to at least a partial eclipse, although these parts of the world are outside of the path of annularity.

Today's eclipse follows a partial lunar eclipse that shadowed the moon above Central Asia, Western Australia, Eastern Europe and Africa. Another minor lunar eclipse will occur on May 24.

This isn't the only solar eclipse of the year. On Nov. 3, a rare annular eclipse that transitions into a total eclipse — called a hybrid eclipse — will be visible in the northern Atlantic Ocean and into equatorial Africa.

WARNING: Never look directly at the sun during an eclipse with a telescope or your unaided eye. Severe eye damage can result and scientists use special filters to safely view the sun.