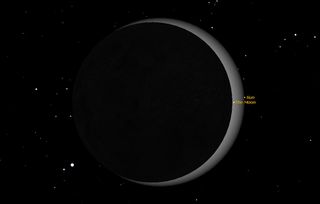 The annular eclipse of the sun by the moon, as it will appear from Cooktown, Queensland, Australia on the morning of May 10, 2013 at 8:49 a.m. local time.
(Image: © Starry Night software)

A spectacular "ring of fire" solar eclipse will be visible from northern Australia Friday morning local time (May 10), treating lucky skywatchers in the region to their second solar eclipse in less than six months.

During this week's annular solar eclipse, which begins late Thursday (May 9) Eastern time due to time zone differences,  the moon's disk will appear to be about 4.5 percent smaller than the disk of the sun, so the effect is like placing a penny atop a nickel. A ring of sunlight remains visible surrounding the moon, resulting in a ring of fire, or annular, solar eclipse.

The shadow path from which the ring will be visible runs for thousands of miles, but will get no wider than 107 miles (172 kilometers) at the point of greatest eclipse. Much of the path falls over the Pacific Ocean, but at or soon after local sunrise Friday (when it will actually be Thursday in North America), it will slice across a part of northern Australia. [See Spectacular Photos of a 'Ring of Fire' Solar Eclipse]

And in Queensland, amazingly, the eclipse track passes over the very same area that experienced a total solar eclipse last November! Places that fortuitously find themselves within the path of both eclipses include Kowanyama, Maramie, and Dixie. The center lines of the two eclipses end up crossing just to the northeast of Mitchell-Alice Rivers National Park.

Just how often does the same region get two solar eclipses in less than six months? Certainly it would seem to be an exceptionally rare occurrence.

The mean frequency of a total solar eclipse for any given spot on Earth is once every 375 years, and it's once every 224 years for annular eclipses, according to the famous Belgian eclipse calculator Jean Meeus, By combination, this yields an annular or a total eclipse every 140 years.

But the paths of total and annular solar eclipses, while narrow, can also run for thousands of miles across the surface of the Earth. And sometimes, the paths of two different eclipses cross each other after a short time interval, as happens with the eclipses of November 2012 and May 2013.

When the moon passes squarely in front of the sun and either completely obscures it or allows a ring of sunlight to remain, we call that a "central" eclipse. A little less than six months is the shortest time interval you can have between two central eclipses.

WARNING: Never look directly at the sun during an eclipse with a telescope or your unaided eye; severe eye damage can result. Scientists and serious eclipse-watchers use special filters to safely view these events. [How to Safely Observe the Sun (Infographic)]

Interestingly, during the 20th century such back-to-back solar eclipses occurred 12 times. But during the 21st century, it happens 23 times.

Chongqing, the largest and most populous of China's four provincial-level municipalities (pop. 31.4 million) was in the totality path in July 2009. Six months later, it ended up on the central line of annularity, with the ring phase lasting 7 minutes and 50 seconds.

The next time this will happen after this week involves two annular eclipses, on Dec. 26, 2019 and June 21, 2020. In fact, the two eclipse tracks will cross each other not once but twice — first over Arabia and later over the Pacific Ocean.

The annular eclipse will last five minutes, while the total eclipse will run an unusually long 4 minutes 26 seconds. Amazing!

While we’re on the subject of successive central solar eclipses in certain places, it's worth pointing out that there are other parts of the globe suffering a solar eclipse drought.

Take for example, northern New York State and much of central and northern New England. The last time an eclipse of the sun was visible from these places was on Christmas Day, 2000.

But the wait will finally come to an end later this year when, on Nov. 3, the latter stages of a partial solar eclipse will be visible at sunrise for the Eastern Seaboard, including upstate New York and New England.

Editor's note: If you live in the observing area of this week's solar eclipse and safely snap an amazing picture of the sun that you'd like to share for a possible story or image gallery, send photos, comments and your name and location to managing editor Tariq Malik at spacephotos@space.com.

Joe Rao serves as an instructor and guest lecturer at New York's Hayden Planetarium. He writes about astronomy for Natural History magazine, the Farmer's Almanac and other publications, and he is also an on-camera meteorologist for News 12 Westchester, New York. Follow us @Spacedotcom, Facebook and Google+. Original article on SPACE.com.