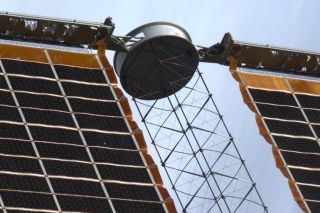 Chris Hadfield snapped this shot of a "bullet hole" created by a micrometeoroid or piece of space junk in one of the space station's solar arrays.
(Image: © Chris Hadfield (via Twitter as @Cmdr_Hadfield))

Astronauts aboard the International Space Station have dodged a cosmic bullet ... literally.

A small piece of space junk or naturally occurring celestial debris created the tiny hole in one of the space station's wing-like solar arrays at some point in the outpost's 14-year history in orbit. Canadian Space Agency astronaut Chris Hadfield spotted the puncture and posted a photo of it on Twitter on Monday (April 29).

"Bullet hole — a small stone from the universe went through our solar array," Hadfield wrote, suspecting the hole was caused by a tiny space rock called a micrometeoroid. "Glad it missed the hull." [Chris Hadfield's Video Guide to Life in Space]

NASA experts estimate that millions of micrometeorites and bits of man-made debris orbit the Earth in the range of operational satellites and the space station. These shards of satellites, rockets and rocky debris are traveling at an average speed of 22,000 mph (35,406 km/h). The space station, for comparison, orbits the Earth at a speed of about 17,500 mph (28,164 km/h).

"The 'bullet' that created the hole in the solar array was probably due to a 1 mm to 2 mm diameter MMOD [micrometeoroids and orbital debris] impact, assuming the hole was on the order of 0.25 inches in diameter," William Jeffs, a NASA spokesperson told SPACE.com in an email. "A 2 mm size MMOD particle is expected to hit somewhere on [the International Space Station] every 6 months or so."

If the piece of space debris were to collide with the hull, the space station's shielding would probably protect the crew from being adversely impacted, Jeffs added.

"Collision with these particles can cause serious damage or catastrophic failure to spacecraft or satellites and is a life-threatening risk to astronauts conducting extra-vehicular activities in space," NASA officials from the agency's Johnson Space Center wrote on the White Sands Test Facility website.

The International Space Station can maneuver out of the way of larger meteoroids and bits of debris if their orbits are tracked well ahead of time.

Particles smaller than 4 inches (10 cm) and larger than 0.4 inches (1 cm) pose a unique problem for tracking efforts, however.

"Fortunately, small particles less than 1 cm pose less of a catastrophic threat, but they do cause surface abrasions and microscopic holes to spacecraft and satellites," NASA officials said. "The greatest challenge is medium-size particles (objects with a diameter between 1 cm to 10 cm), because they are not easily tracked and are large enough to cause catastrophic damage to spacecraft and satellites."

In total, NASA estimates that about 95 percent of all objects in orbit around the Earth are debris and not active satellites.