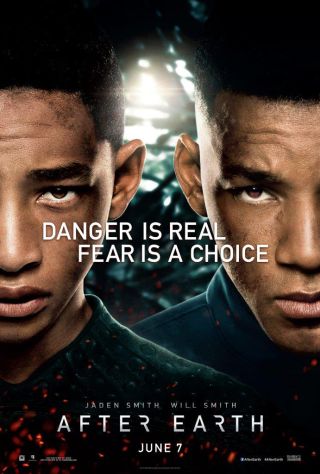 A new movie set for release in June shows Earth 1,000 years into the future. Will and Jaden Smith star in a movie directed by M. Night Shyamalan.
(Image: © Columbia Pictures)

The creators of the new sci-fi movie "After Earth" have launched a competition to encourage creative teenagers to dream up visions to make the world a better place.

The "After Earth" Challenge, sponsored in part by the X Prize Foundation, involves two phases that focus on robotics, sustainability and space travel. One winning team will be featured in a special segment on the Blu-ray release of the movie, receive a signed copy of the disc and will be awarded other prizes.

Written by screenwriter M. Night Shyamalan, "After Earth" stars Will Smith and son Jaden Smith and depicts an inhospitable Earth, portrayed long after humans have left the planet to live on the Nova Prime — a fictional planet light-years from Earth. The film will land in theaters on May 31. [Sci-Fi Film 'After Earth' Envisions Strange Future (Photos)]

"Through an immersive two-stage competition, the X Prize 'After Earth' Challenge propels individuals to engage in meaningful discussions regarding space exploration and environmental sustainability, while applying fundamental principles of science, technology, engineering, arts and mathematics in navigating the fictitious universe of 'After Earth,'" X Prize officials explained in a statement.

The X Prize Foundation is a non-profit group that seeks to spur development in science and technology through competition and cash prizes. The foundation's first competition, the Ansari X Prize won in 2004, was a $10 million contest that challenged entrants to build and launch private, reusable manned spacecraft capable of flying to suborbital space and back. Since then, the group has expanded its efforts to include contests in genomics, private moon exploration and other fields.

To join the "After Earth" Challenge, teams must be composed of two to five students ages 13 to 17 with one team captain that is 18 years or older.

For the first part of the challenge, teams will create a two-minute video. The video should explain what the students are doing in their communities to "promote a more sustainable way of living, ensuring that we will not have to evacuate our planet," officials with the competition wrote.

The students will also need to explain what they would do if they were controlling a rover on Nova Prime.

"Your team has been tasked with sending an unmanned rover to explore Nova Prime, a potential site for humanity's next settlement," competition officials wrote in the challenge description. "What steps should your rover take in order to assess if Nova Prime is habitable?"

The answer to that question leads directly into the second part of the competition. Ten teams chosen by judges and popular vote will be selected to move on into phase two.

Those 10 groups will be given Lego Mindstorms kits to bring their Nova Prime world to life while filming the process. The robot the students build with their kits will complete different tasks during a demonstration in their hometowns that judges will evaluate after reviewing video of the recorded event.

The grand prize winner will be announced on Aug. 9. The deadline to submit a video is June 7. A complete set of rules can be found on the "After Earth" Challenge website.