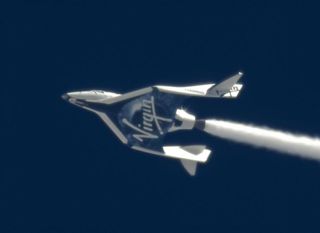 Video: SpaceShipTwo Rises On A Tail Of Fire

The space tourism company Virgin Galactic appears to be go for its first rocket-powered test flight of SpaceShipTwo — a commercial rocket ship for passenger space travel.

There is a palpable buzz of a possible test flight of SpaceShipTwo on Monday (April 29) at the Mojave Air and Space Port in Mojave, Calif. The test is rumored to be a 20-second burn of SpaceShipTwo's novel hybrid rocket motor in flight.

SpaceShipTwo is designed to use the rocket motor to power private launches that will carry six passengers and two pilots to suborbital space and back. So the possible test flight would be a major milestone for the spacecraft and Virgin Galactic. [See amazing photos of SpaceShipTwo test flights]

Virgin Galactic's founder, the British billionaire Sir Richard Branson, hinted at a powered flight test on April 23 during an interview with the Las Vegas Sun newspaper at an event for his other company, Virgin Atlantic, which began Los Angeles to Las Vegas service last week.

"We're hoping to break the sound barrier. That's planned Monday," Branson told the Las Vegas Sun. "It will be a historic day."

Mum's the word, with fingers crossed

Despite Branson's tantalizing comments, Virgin Galactic and Mojave officials are tight-lipped on Monday's test, given the fact that technical or weather delays could affect their plans.

Whitesides told SPACE.com that whenever the first flight occurs, the primary goal "is smooth and safe demonstration of the vehicle system in terms of rocket ignition, shut off, and aerodynamic controls."

Officials in Mojave were also short on details for any SpaceShipTwo tests on Monday.

"While we can't comment on tenant test plans, we always strive to accommodate our friends in the press," Stuart Witt, CEO and general manager of the Mojave Air and Space Port, told SPACE.com in response to a query.

While a pilot hitting the start button on SpaceShipTwo's motor is not a hosted event for press and public, Witt added, "we try to accommodate the interest of the public. We never know times or dates … it is the nature of flight test."

According to Mojave-based company Scaled Composites, which is building SpaceShipTwo and its WhiteKnightTwo carrier plane for Virgin Galactic, the piloted craft has undergone 25 glide flight tests since October 2010. The latest SpaceShipTwo drop test on April 12 was a nitrous vent test and was labeled as powered flight number 1 "mission rehearsal."

"Here the fuel is in solid form and the oxidizer is a liquid. The passage of the oxidizer over the fuel is controlled by a valve which allows the motor to be throttled or shut down as required," the website explains.

Hybrid motors offer both simplicity and safety, Virgin Galactic officials added. According to the company description: "This is the type of motor that SpaceShipTwo will employ and that was used by SpaceShipOne. It means that the pilots will be able to shut down the SpaceShipTwo rocket motor at any time during its operation and glide safely back to the runway. The oxidizer is Nitrous Oxide and the fuel a rubber compound; both benign, stable as well as containing none of the toxins found in solid rocket motors."

Furthermore, Sierra Nevada is developing a similar hybrid engine to power its reusable Dream Chaser space plane, a spacecraft that is vying to provide astronaut flights for NASA.

As for the prospects of an upcoming SpaceShipTwo hybrid motor flight, Mark Sirangelo Corporate Vice President, SNC’s Space Systems, told SPACE.com: "We are looking good for the flight. Motor passed all its multiple qualification burns and tests with no issue."

Leonard David has been reporting on the space industry for more than five decades. He is former director of research for the National Commission on Space and is co-author of Buzz Aldrin's new book "Mission to Mars – My Vision for Space Exploration" out in May from National Geographic. Follow us on Twitter, Facebook and Google+. Original article on SPACE.com.