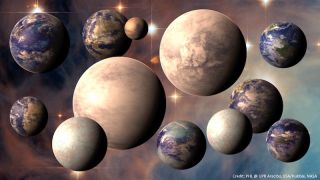 At the 2012 Astrobiology Science Conference, Astrobiology Magazine hosted a plenary session called "Expanding the Habitable Zone: The Hunt for Exoplanets Now and Into the Future."

The session featured a panel of exoplanet hunters and thinkers, who held a lively discussion about some of the most important issues facing the search for and understanding of alien worlds orbiting distant stars.

The following transcript relays some of their opening thoughts. It's the first entry in Astrobiology Magazine's eight-part series, "The Great Exoplanet Debate."

I am David Grinspoon. I am the Curator of Astrobiology at the Denver Museum of Nature and Science, and my research focuses on atmospheric evolution, climate evolution of Earth-like planets. That's why I'm interested in extrasolar planets, in addition to the fact that they’re cool.  And if you're a human being alive today, I don't see how you could not be interested in them. But what I want to do now is introduce the panelists, the debaters or discussants. And I am just going to say who they are and where they're from, and then I am going to let them each briefly introduce themselves and talk about their own research interests and why they’re interested, and how they come to the subject of extrasolar planets.

So starting here at my immediate right, we have Dr. Dirk Schulze-Makuch. Dirk is a Professor at the School of Earth and Environmental Science at Washington State University. Dirk, tell us a little about yourself.

Dr. Dirk Schulze-Makuch: Okay, thanks David. Well, my main research area is planetary habitability.  So I am basically interested in any kind of planets and moons that could harbor life or where we could find some kind of biosignatures or life signatures from Mars to [Saturn's moon] Titan to [Jupiter's moon] Europa, Venus and exoplanets. And I actually enjoy very much too to look at possibilities of different bio-chemistries and how different life could be at these places.

For example, one of our research projects is a natural liquid asphalt lake in Trinidad, where we found a slew of different micro-organisms. We used the type this kind of liquid asphalt lake as an analog to Titan. And some other research sites where we look, our project is to look from the juncture from single cellular life to multi-cellular life, and we developed recently some kind of indices for planetary habitability, for bio-complexity, so when we see certain signals and signs from exoplanets that we can correctly interpret them. Thank you. [5 Bold Claims of Alien Life]

David Grinspoon: Okay, thanks Dirk. Next I'd like to introduce Sara Seager. Sara is a Professor of Planetary Science and Physics at the Massachusetts Institute of Technology. Sara, what's your angle on all this?

Sara Seager: First, I just want to thank everyone for coming out to the panel. And one topic that we are going to address later which might be of interest to all of you is, what makes a planet habitable and are there any habitable planets? As you know in the media, we have heard that a habitable planet has been discovered again, and again, and again. And my main interest is actually finding and characterizing habitable worlds.

My research at MIT is divided into two groups. One I just call "Theory and Computation," where we make complex computer models to predict or interpret data on exoplanet atmospheres. Today those are limited to hot Jupiters and hot Neptunes. You can call them mini-Neptunes and things like that. We also work on biosignatures and other related elements.

The other growing part of my research is in space engineering. And what we are trying to do is take part in what could be a revolution in space science by building upon the small satellites. And what I have brought here that we can talk more about later, and you are welcome to come up after the talk, is a demonstration model which is the actual size, actual volume, close to the actual mass.

This is not functional, unfortunately. It's just to demonstrate a small satellite. And what this would do, it would be very complementary to Kepler [NASA's planet-hunting Kepler space telescope]. Where Kepler is one big telescope, looking at a bunch of faint stars, this would be one small telescope looking at one star. And the idea would be a graduated growth of a constellation, to eventually look at lots of stars at one time.

So there are a lot of things going on on exoplanets. And let's hear from our other panelists and we'll see where this discussion or debate goes. [9 Potentially Habitable Exoplanets (Countdown)]

David Grinspoon: Thanks, Sara. Next I'd like to introduce Vikki Meadows. Vikki is a Professor of Planetary Astronomy at the University of Washington in Seattle. And she is also principal investigator of the Virtual Planetary Laboratory. Vikki?

Vikki Meadows: My training is actually as a planetary astronomer. In fact my Ph.D. thesis was on observations of Venus using near-infrared windows, spectral windows to look down into the lower atmosphere of Venus to search for water vapor down there.  And also to look for oxygen high in the atmosphere produced by photolysis. So it is kind of ironic that my sort of introduction to planetary astronomy was to look for water and oxygen on what is arguably the least habitable planet in the solar system. I did find them there though, so that is interesting.

My current work is in the area of terrestrial exoplanet characterization. And since we don't yet have a terrestrial exoplanet we are able to characterize with something like spectroscopy, this is largely a theoretical field. So to that end, I lead a team called the Virtual Planetary Laboratory, as David mentioned, which is one of the NASA's Astrobiology Institute teams. And our main scientific goal of this 15-member team is to answer the scientific question: "If we were to find a terrestrial planet orbiting another star in the habitable zone, how would we be able to recognize and prove that that planet was in fact able to support life or had life on it?"

So the VPL concentrates on questions on planet habitability and biosignatures for extrasolar planets. To do this, as I said, it is theoretical; we primarily use planetary models that look at planet/star interactions. Both the interaction of the radiation from the star, in the form of how it forces climate and how it effects surface radiation fields for life. And also at the gravitational interaction between the planet and star, which can affect things like tidal forces, so that the deposition of energy into a body and also affect orbital evolution of a time and look at how that affects habitability.

We also look at the Earth as if it were an extrasolar planet, because even though I expect an incredible diversity of worlds out there, the Earth is always going to be our best-studied example of a habitable planet. We just can't get away from that. So we try and learn as much as possible about the Earth as an astronomical target.

But because the Earth is an astronomical target, it is just our modern Earth, we also care about what the Earth looked like throughout time. Because the Earth through time gives us examples of habitable planets that are very alien to our current modern world, but in fact did exist, and we have biological and geological constraints on them. So all of the theoretical work is also gathered together and the predictions that we make for what we think are new habitability markers on new biosignatures are run through instrument simulators to try and determine if they would be detectable to things like JWST [NASA's James Webb Space Telescope] and the Terrestrial Planet Finder mission. [BuildingThe James Webb Space Telescope (Photos)]

And finally I want to say that my other hat is as Director of the University of Washington's graduate program in Astrobiology. And we have had a graduate certificate in Astrobiology now for about 13 years, but we are in the process of converting that over to a dual-titled degree, so if you are an astronomer you can get a PhD in Astronomy and Astrobiology. So I would like to encourage all of those of you who come in contact with bright young undergraduates who’d like to be astrobiologists, please consider sending them to our new PhD program.

David Grinspoon: All right, thanks Vikki.  And finally, our last panelist this afternoon is Eric Ford. Eric is a Professor of Astronomy at the University of Florida. And Eric, tell us what you know.

I get my hands dirty with a little bit of data looking at radio velocities, Doppler searches.  And most recently I have had the privilege to join the Kepler planet search team, and we are very much excited about the possibility of detecting and confirming and characterizing planets based upon the gravitational interactions of multiple planets orbiting the same star, tugging on each other, causing slight deviations from periodic transits.

In my other sort of hats I have interests in statistics and computations. So I work on developing tools that can be applied both to exoplanets, my own research and sometimes other areas as well.

You can watch the full "Great Exoplanet Debate" here: https://connect.arc.nasa.gov/p68qflmgnhk/?launcher=false&fcsContent=true&pbMode=normal