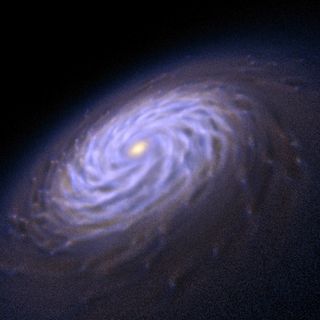 Powerful new computer simulations like this one are allowing astronomers to understand how spiral arms in galaxies form and survive. These simulations suggest that the arms arise as a result of the influence of giant molecular clouds - star forming regions or nurseries common in galaxies. Image released April 2, 2013.
(Image: © Thiago Ize & Chris Johnson (Scientific Computing and Imaging Institute)

New supercomputer simulations show how spiral galaxies like the Milky Way get, and keep, their skinny, star-studded arms.

Spiral galaxies are quite common in the universe. We live in one and 70 percent of our closest galactic neighbors are spiral-shaped, too — flat, rotating disks with arms of stars, gas and dust curling outward from a central stellar bulge.

Researchers have long debated whether the arms in spiral galaxies come and go over time, or whether the material that makes up the arms get jammed up by the effects of gravity and stay put.

To help put some of those questions to bed, scientists used powerful software to model the formation of stand-alone disk galaxies and follow up to 100 million hypothetical stellar particles being tugged at by gravity and other astrophysical forces. The simulations allowed researchers to create a video animation of spiral galaxy evolution to show how their arms form.

"We show for the first time that stellar spiral arms are not transient features, as claimed for several decades," study researcher Elena D'Onghia, a University of Wisconsin, Madison astrophysicist, said in a statement.

The team found that giant molecular clouds, which often serve as star factories, can instigate the formation of spiral arms. While the clouds act as initial "perturbers," the researchers say they also can help sustain a spiral galaxy's arms indefinitely.

The research is detailed in the March 20 issue of The Astrophysical Journal.