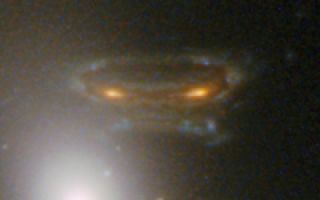 Anyone who played the classic 1970s computer game "Space Invaders" may recognize the titular aliens in the form of a strange-looking distant galaxy spotted by the Hubble Space Telescope.

The galaxy's image has been stretched and mirrored to look like an alien by a cosmic effect called gravitational lensing, scientists said in an image announcement today (March 5). Very massive objects, such as clusters of galaxies, can deform space-time itself, so that light passing through it travels a curved path and produces a distorted image. The phenomenon is called lensing because it often magnifies the images of distant objects that would otherwise be too small and faint to be visible.

That's just what happened with a faraway elliptical galaxy that lies billions of light-years from Earth. When its light passed near the massive Abell 68 galaxy cluster, the light was bent and warped, producing a picture resembling a squat alien invader when viewed from Earth.

Scientists released a video of the "space invader" Hubble view, in addition to the amazing new images.

Gravitational lensing is a powerful tool for astronomy, letting scientists boost the already formidable magnifying powers of their best telescopes, such as Hubble, to glimpse some of the most distant and faint objects in the universe.

"These distorted images of distant galaxies are a particularly fine example of this phenomenon," Hubble officials said in a statement. "In the middle of the image are a large number of galaxies stretched out into almost straight streaks of light that look like shooting stars."

The image was captured in infrared light by Hubble's Wide Field Camera 3, combined with near-infrared data taken by the telescope's Advanced Camera for Surveys.

The Hubble Space Telescope launched in April 1990 and is still going strong, after having been repaired and upgraded by visiting space shuttle missions five times. The observatory could continue to operate through at least 2018, officials have said, when its successor, the James Webb Space Telescope, is due to launch.