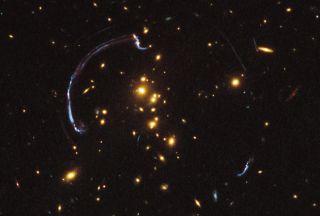 A fluke of astrophysics has revealed what scientists are calling the brightest galaxy ever seen through a cosmic "zoom lens," NASA officials say.

"This observation provides a unique opportunity to study the physical properties of a galaxy vigorously forming stars when the universe was only one-third its present age," NASA officials explained in a statement released Thursday (Feb. 2). The universe is currently about 13.7 billion years old.

A gravitational lens is created when a massive object, like a black hole or galaxy cluster, falls in between an observer (like the Hubble telescope) and a more distant target in the background.

The gravitational force of the foreground object warps space, causing light from the distant target to travel on a twisted path as it passes by. When it reaches the observer, the light is distorted, and can be magnified as if it had passed through a giant telescope. [See photos of Hubble's gravity lens galaxy]

Scientists rely on gravitational lenses in order to get a glimpse at the frenetic star-formation regions of distant galaxies in the early universe. Nearby galaxies tend to appear more mature and in the waning stages of star-formation, researchers said.

In the new Hubble image, astronomers aimed the space telescope at the galaxy cluster RCS2 032727-132623, which is surrounded by a nearly 90-degree arc of bright light from an even more distant galaxy. Because of the gravity distortions, the image of the background galaxy is repeated several times — a hallmark feature of gravitational lenses, researchers said.

"The challenge for astronomers was to reconstruct what the galaxy really looked like, were it not distorted by the cluster's funhouse-mirror effect," according to NASA's image description.

The astronomers used data from Hubble's observations to remove the distortions caused by the gravitational lens, revealing a view of the distant galaxy filled with star-forming areas that shine brighter than similar spots in our own Milky Way.

"Hubble's view of the distant background galaxy is significantly more detailed than could ever be achieved without the help of the gravitational lens," NASA officials wrote.

Astronomer Jane Rigby of NASA's Goddard Space Flight Center in Greenbelt, Md., led the team of scientists that obtained the Hubble view. Astronomer Keren Sharon of the University of Chicago led the study on the distant galaxy, which will be detailed in an upcoming edition of the Astrophysical Journal.