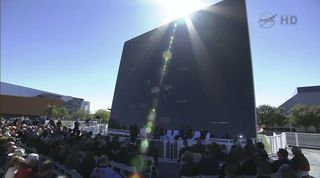 President Barack Obama paid tribute to the seven astronauts who died in the space shuttle Columbia accident 10 years ago, along with all of those who lost their lives in the pursuit of space, in a statement released today (Feb. 1).

"Space exploration and the sacrifice these pioneers made benefits us all," Obama said in the statement. "Today, we honor their lives and recommit ourselves to living up to their shining example."

NASA held a ceremony today commemorating the loss of Columbia and its crew, as well as the deaths of seven astronauts when the shuttle Challenger was destroyed shortly after liftoff on Jan. 28, 1986, and the tragic Apollo 1 capsule ground fire on Jan. 27, 1967, which took the lives of three astronauts.

"We will never forget these astronauts nor all those who have lost their lives carrying out our missions of exploration," NASA administrator Charles Bolden said in a statement. "These explorers, and their families, have our deepest respect. We work every day to honor and build on their legacy and create the best space program in the world — to infuse it with the life and vitality that they worked so hard to achieve." [Columbia Shuttle Disaster Explained (Infographic)]

Obama reiterated his support for NASA's past achievements, as well as for its future, which includes building a new spacecraft and heavy-lift rocket to take people to the moon, asteroids and Mars.

"As we undertake the next generation of discovery, today we pause to remember those who paid the ultimate sacrifice on the journey of exploration," Obama said. "Right now we are working to fulfill their highest aspirations by pursuing a path in space never seen before, one that will eventually put Americans on Mars."

The president acknowledged that space remains a difficult, risky business, but one worth pursuing.

"The exploration of space represents one of the most challenging endeavors we undertake as a nation," Obama said. "Whether it's landing a 1-ton rover on Mars, building a space telescope 100 times more powerful than the Hubble, or preparing to send humans beyond the Moon, it's imperative America continues to lead the world in reaching for the stars while giving us a better understanding of our home planet."

Many in NASA were working for the agency at the time of the Challenger shuttle accident, and even more were there for the Columbia disaster. For those who knew the crews personally, and worked alongside them, the anniversaries are especially poignant.

"Today, I laid wreaths at Arlington National Cemetery for these fallen heroes, and at the Kennedy Space Center, wreaths were laid at the Space Mirror Memorial. Across the country, all flags at NASA Headquarters and the NASA centers will be flown at half-mast in memory of our colleagues lost in the cause of exploration," Bolden said. "And while those gestures will signify to the nation and the world that we have not forgotten, as we look to the future, we will each remember in our own personal way our colleagues and friends, and what their work meant to us. Together we will carry them with us in our hearts as we propel ourselves to the next big horizon and make their dreams reality."