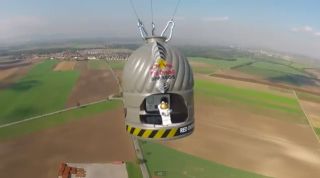 Austrian daredevil Felix Baumgartner amazed the world when he went supersonic during a record-smashing 24-mile skydive on Sunday (Oct. 14). If it left you wanting more, have no fear: You can see it again in … LEGO form.

A YouTube video ad for the Model Maker Faire in Vienna this month recreates Baumgartner's epic jump with space-themed LEGO figures, a weather balloon and a homemade capsule that appears to have been some sort of a bottle in an earlier life. The video, complete with a sweeping soundtrack, faithfully recounts the 43-year-old Baumgartner's world's highest skydive feat, called the Red Bull Stratos mission, which was sponsored by the energy drink of the same name.

Like the real Baumgartner, the LEGO space jumper climbs into a capsule and soars into the sky. The LEGO man may not have hit Baumgartner's eye-popping height of 128,00 feet (39,000 meters), but the images of Earth from model's tiny cameras still provide a majestic view.

One big difference: The real Baumgartner made his leap willingly in pursuit of world records. The LEGO version needed a bit of a shove. A micro-server inside the capsule pushed the LEGO Baumgartner figure out at jump time, the video makers said in a comment.

Launching camera-equipped weather balloons skyward with LEGO figures and other toys has become a phenomenon of sorts. In January, two Canadian teenagers sent a LEGO figure toting a Canadian flag up to a height of 80,000 feet before its balloon popped and the toy returned under a parachute.

In March, model maker Raul Oaida sent a LEGO space shuttle nearly 115,000 feet up and returned it to Earth using a parachute, recording a spectacular video of the tiny space shuttle flight.

If LEGO space jumps fail to impress you, Baumgartner's Red Bull Stratos team did release an amazing video if the actual flight. You can watch it here: