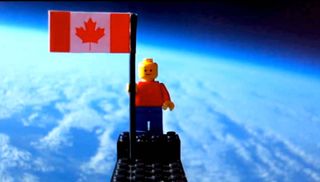 This still from a video uploaded to YouTube by Toronto 17-year-olds Mathew Ho and Asad Muhammad shows their homemade balloon launch of a Lego minifigure into the stratosphere to catch views of near space.
(Image: © Mathew Ho/YouTube)

That's one giant leap for Lego. Two Canadian highschoolers have wowed the Web with their video of a Lego toy taking a balloon ride to near-space.

The video, made by Toronto 17-year-olds Mathew Ho and Asad Muhammad, shows a tiny Lego man holding a Canadian flag with the blue curve of the Earth far below and the black of space above. It is the latest example of do-it-yourself near-space photography by an amateur balloon launching team.

The teens used a weather balloon to carry the Lego minifigure and set of cameras, one with a fish-eye lens, into to the stratosphere, ultimately reaching a height of nearly 80,000 feet (24,384 meters) before the balloon burst, according to the Toronto Star. Once the balloon popped, the Lego man and its attached cameras fell back to Earth under a homemade parachute.

The entire flight took about 97 minutes and resulted in two videos and 1,500 photos. The teens posted the video on YouTube, where it has been viewed more than 937,000 times.

"We never knew it would be this good," Ho told the Toronto Star in a Jan. 25 report.

Ho and Muhammad said they were inspired by a similar near-space balloon launch by students at the Massachusetts Institute of Technology. The two 12th graders, who attend the Agincourt Collegiate Institute, spent about $400 and four months building their Lego man balloon ship, then waited for the best wind conditions to launch it into the stratosphere from a local soccer field.

According to the Toronto Star, the balloon reached its maximum height in about 65 minutes, with the Lego man and its Styrofoam–packed cameras taking about 32 minutes to fall back to Earth. A set of hand-warmers kept the cameras warm enough to snap photos of the flight and the entire package was recovered nearly 76 miles (122 kilometers) away from the launch site.

"We didn’t really believe we could do it until we did," Ho told the Toronto Star.