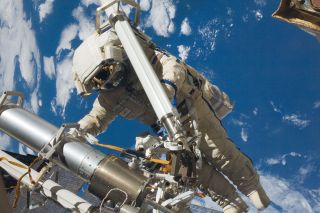 Cosmonauts Gennady Padalka and Yuri Malenchenko will conduct a 6.5-hour spacewalk to complete maintenance and repairs on the exterior of the space station. The cosmonauts are expected to exit the Pirs module in their Russian Orlan spacesuits at 10:40 a.m. EDT (1440 GMT).

Today's work will be the first spacewalk of the station's Expedition 32 mission. Two other astronauts on the station's six-person crew will carry out a separate spacewalk for NASA on Aug. 30.

For today's excursion, Padalka and Malenchenko will focus primarily on installing new micrometeoroid debris shields over parts of the Russian Zvezda service module and moving a hand-operated crane, called Strela-2, from the station's Pirs docking module to the outpost's Zarya control module.

The cosmonauts are moving the crane to clear the area by the Pirs compartment in preparation for a new Russian laboratory module. This new unit is slated to launch to the space station in 2013, NASA officials said. [Gallery: Building the International Space Station]

Once these tasks are complete, the cosmonauts may have the opportunity to retrieve two science experiments from the outside of the station. These experiment panels are being used to assess how different materials react to the vacuum of space, said Dina Contella, Expedition 32 lead flight director at NASA's Johnson Space Center in Houston.

If Padalka and Malenchenko find themselves ahead of schedule, they may be asked to collect two of these experiment panels.

If there is extra time, the cosmonauts may also "launch" a small spherical satellite from the orbiting outpost. The satellite is part of a special Russian science experiment, and is designed to remain in orbit for three months before plummeting into Earth's atmosphere and burning up, Contella explained.

Williams and Hoshide are scheduled to perform their own 6.5-hour spacewalk on Aug. 30.

Both the Russian and U.S. spacewalks will be broadcast live on NASA Television here: http://www.nasa.gov/ntv