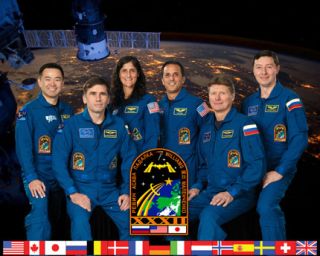 Astronauts living on the International Space Station will cap a busy summer with a pair of spacewalks this month to upgrade and repair the exterior of their home in orbit.

On Monday (Aug. 20), two Russian cosmonauts, Gennady Padalka and Yuri Malenchenko, will venture outside the space station to perform a variety of maintenance tasks. Ten days later, on Aug. 30, American astronaut Sunita Williams and Japanese astronaut Akihiko Hoshide will also step out into the vacuum of space to complete their own list of tasks.

The two spacewalks are the only ones planned during the station's current Expedition 32 mission, NASA officials said. Williams and Hoshide will also be performing the first NASA spacewalk in more than a year. The last American excursion outside the orbiting complex was carried out by station astronauts Mike Fossum and Ron Garan in July 2011, during the agency's final space shuttle mission.

"Things are going extremely well on the space station," Dina Contella, Expedition 32 lead flight director at the Johnson Space Center in Houston, told reporters during a news briefing today (Aug. 14). "The crew is in great spirits, looking forward to a pair of spacewalks coming up."

The cosmonauts will install debris shields to protect parts of the Russian Zvezda service module, and will move a cargo crane from the Pirs docking module to the nearby Zarya module. The crane is being moved to make way for a new Russian laboratory unit that is scheduled to launch to space station and be installed in 2013, NASA officials said. [Gallery: Building the International Space Station]

If the cosmonauts complete their main tasks ahead of schedule, they will retrieve two science experiments from the exterior of the station, and release a spherical satellite — part of a separate Russian experiment — into space.

Padalka and Malenchenko are both veteran spacewalkers. Padalka has conducted eight spacewalks — six at the International Space Station and two at the Russian Mir space station. Malenchenko has previously worked outside in the vacuum of space four times.

On Aug. 30, Williams and Hoshide will don their bulky white spacesuits and will embark on a 6.5-hour spacewalk of their own. Williams has conducted four previous spacewalks, but it will be Hoshide's first time venturing outside the orbiting lab, NASA officials said.

The duo will be focused on replacing a faulty power box, running cables along the outside of the station to prepare for the new Russian module, and removing and installing a new camera on the space station's robotic arm.

While some of these spacewalk objectives were added recently to address unexpected malfunctions, such as to the camera on the robotic arm, the astronauts feel ready and confident that they can successfully execute all the tasks, said Kieth Johnson, lead U.S. spacewalk officer.

"What ends up happening is we change priorities and change tasks … that they looked at in their training a while ago," Johnson explained.

With these changes, one of the most important things that will be monitored by ground controllers is the amount of time spent on each task. With a full list of things to accomplish, it is important that the astronauts not fall too far behind schedule, Johnson said.

The two spacewalks will be broadcast live on NASA Television here: http://www.nasa.gov/ntv