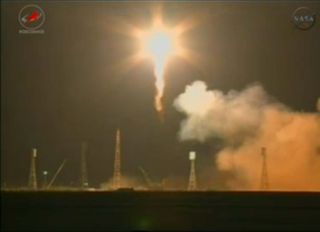 A Russian Soyuz rocket launches into space carrying the unmanned Progress 48 cargo ship on a first-ever 6-hour flight to the International Space Station on Aug. 1 EDT in 2012. The rocket launched from Baikonur Cosmodrome in Kazakhstan, Central Asia.
(Image: © NASA TV)

A robotic Russian cargo ship launched toward the International Space Station today (Aug. 1) to deliver a fresh load of supplies and test a new same-day docking plan that, if successful, will make it the first spacecraft ever to arrive at the orbiting lab within hours of liftoff.

The unmanned Progress 48 cargo ship blasted off atop a Soyuz rocket at 3:35 p.m. EDT (1935 GMT) from the Baikonur Cosmodrome in central Asia. It was early Thursday morning local time at the site of the Russian spaceport. Since the spacecraft is attempting a novel same-day rendezvous and docking maneuver, it should arrive at the space station roughly six hours after liftoff, NASA officials said.

If everything goes according to plan, Progress 48 will arrive at the space station tonight at 9:24 p.m. EDT (0124 GMT Aug. 2). The robotic spacecraft will automatically park at the Pirs docking compartment on the Russian segment of the outpost.

Russia is aiming to eventually implement this same-day docking plan for future manned flights of Soyuz space capsules to the International Space Station.

"They're looking to eventually take this into the Soyuz phase," Dan Harman, NASA's space station manager of operations and integration, said in a news briefing last week. "If you can get the crew to orbit in six hours and onboard the International Space Station, that could be a tremendous benefit over the two-plus days it takes today." [Photos: Russia's 1st Same-Day Cargo Ship Flight to Space Station]

Progress and Soyuz vehicles typically spend two days chasing the space station in orbit after launch. A quicker arrival to the orbiting complex could cut down the overall amount of consumables — such as food, water and fuel — needed for the onboard crew.

Docking to the station within hours of launch also minimizes the amount of time the astronauts spend inside the small Soyuz capsule, which could improve the comfort of the spaceflyers, said space station flight director Chris Edelen.

"The quicker rendezvous that you have, the less consumables you would need for the first day, and the better crew comfort in a small capsule," he said.

If Progress 48 is unable to carry out the same-day rendezvous and docking, Russian flight engineers have the option of reverting back to the normal two-day procedure, NASA officials said. In that case, Progress 48 would arrive at the space station Friday (Aug. 3).

The idea of arriving at a destination on the same day as launch is not a new one. NASA first tested the same-day rendezvous procedures between spacecraft in the mid-1960s during the agency's Gemini program.

"This is actually old technology," Edelen explained. "Our first ground-up rendezvous on the Gemini program was a Flight Day 1 rendezvous, and the Russians have done this before, so it's sort of a back to the future."

The Progress 48 cargo freighter is hauling 2 tons of food, clothing and supplies for the crew of the International Space Station. There are currently six spaceflyers who are living and working aboard the massive orbiting laboratory: Russian cosmonauts Gennady Padalka, Yuri Malenchenko and Sergei Revin, NASA astronauts Joe Acaba and Sunita Williams, and Japanese astronaut Akihiko Hoshide.

These spaceflyers make up the space station's Expedition 32 crew. The astronauts are expected to monitor the Progress 48's launch and docking.

The disposable Progres cargo ship is expected to remain attached to the space station for several months, before it is filled with trash and intentionally sent to burn up during re-entry into the Earth's atmosphere.