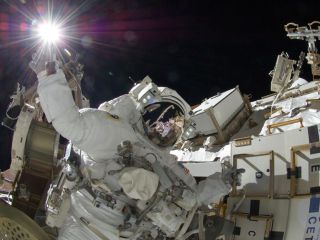 NASA astronaut Sunita Williams appears to touch the bright sun during Expedition 32's third spacewalk on Sept. 5, 2012. Williams and Japanese astronaut Akihiko Hoshide (visible in the reflection of Williams' helmet visor) fixed a key power unit on the exterior of the orbiting outpost during the 6 1/2-hour outing.
(Image: © NASA)

NASA astronaut Sunita Williams, Expedition 32 flight engineer and commander of the International Space Station's Expedition 33 crew, poses for a photo with her spacesuit ahead of an Aug. 30, 2012, spacewalk.

Expedition 32 commander Gennady Padalka, a Russian cosmonaut, throws the small Spherical Satellite into orbit during an Aug. 20, 2012, spacewalk outside the International Space Station. The small satellite will spend three months in orbit and be used for space tracking experiments.

Japanese astronaut Akihiko Hoshide is pictured during a spacewalk on Sept. 5, 2012. During the six-hour, 28-minute spacewalk, Hoshide and NASA astronaut Sunita Williams (out of frame) fixed a critical station power unit and installed a camera on the outpost's robotic arm.

This still image shows the view of Earth and part of the International Space Station from the helmet video camera of station commander Gennady Padalka during an Aug. 20, 2012 spacewalk. Padalka was at the end of a station crane during this view.

Astronauts in the Cupola

NASA astronaut Joe Acaba, Expedition 31/32 flight engineer, poses for a photo with Robonaut 2 humanoid robot in the Destiny laboratory of the International Space Station in June 2012.

NASA astronaut Sunita Williams (front left) takes command of the International Space Station from cosmonaut Gennady Padalka (front right) during a ceremony marking the start of the Expedition 33 increment aboard the space station on Sept. 15, 2012.