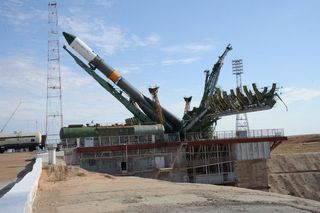 The unmanned Russian supply ship Progress 48 is raised into launch position ahead of its Aug. 1, 2012 EDT launch from Baikonur Cosmodrome in Kazakhstan, Central Asia. The Progress 48 capsule will attempt to launch and deliver tons of cargo to the International Space Station in a single day in a first-ever test.
(Image: © RSC Energia)

An unmanned Russian cargo ship launching to the International Space Station today (Aug. 1) is set to become the first spacecraft ever to dock at the orbiting laboratory on the same day as its launch, according to NASA officials.

The Progress 48 cargo freighter is slated to blast into orbit atop a Soyuz rocket at 3:35 p.m. EDT (1935 GMT) from the Baikonour Cosmodrome in central Asia, and will test a new docking procedure at the orbiting lab about six hours later.

The vehicle is scheduled to arrive at the International Space Station  at 9:24 p.m. EDT (0124 GMT Aug. 2). If the demonstration is successful, Russia intends to use this same-day rendezvous and docking process for manned Soyuz flights to deliver new crewmembers to the massive orbiting laboratory.

Typically, after Progress and Soyuz vehicles are launched, they spend two days chasing the space station in orbit before automatically parking themselves at the complex. The new procedure, based on far more precise measurements, would reduce the amount of time astronauts would have to spend in transit, said Dan Harman, NASA's space station manager of operations and integration.

"They're looking to eventually take this into the Soyuz phase," Harman told reporters last week. "If you can get the crew to orbit in six hours and onboard the International Space Station, that could be a tremendous benefit over the two-plus days it takes today." [Infographic: How Russia's Progress Spaceships Work]

For manned Soyuz flights, arriving at the space station sooner could increase crew comfort by minimizing the time astronauts spend inside the cramped confines of the Soyuz capsule.

Reaching the station only hours after launch also would cut down the amount of food, water and other cargo needed for the journey, said space station flight director Chris Edelen.

"The quicker rendezvous that you have, the less consumables you would need for the first day, and the better crew comfort in a small capsule," he explained.

But preparing for a same-day rendezvous in space requires far more precise calculations at the time of launch.

NASA employed same-day rendezvous procedures between spacecraft during its Gemini program in the mid-1960s.

Goods for the space station

Once it arrives, Progress 48 will attach itself to the Pris docking compartment on the Russian segment of the space station. This parking spot was vacated by another of Russia's disposable cargo freighters, Progress 47, on July 30.

Before leaving the station, Progress 47 tested the upgraded automatic docking system that will be used on future robotic Progress and manned Soyuz vehicles. Progress 47, filled with trash from the space station, eventually will plummet back toward Earth and be destroyed as it travels through the atmosphere. At the end of their missions, the Progress vehicles are intentionally burned up as they re-enter the atmosphere, disposing of trash in the process.

If Progress 48 is unable to carry out the same-day rendezvous and docking, Russian flight engineers have the option of reverting back to the normal two-day procedure, NASA officials said. In that case, Progress 48 would arrive at the space station Friday (Aug. 3).

You can watch NASA's live webcast of the Progress 48 launch and docking here: http://www.nasa.gov/ntv

Editor's note: This story was updated to correct the statement that no same-day dockings occurred during NASA's Gemini program.