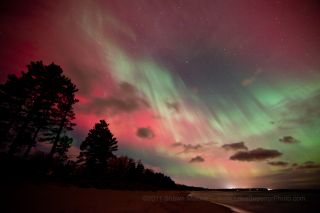 This spectacular photo of red, pink and green auroras on Oct. 24, 2011 was taken by photographer Shawn Malone of Marquette, Michigan, from the shore of Lake Superior
(Image: © Shawn Malone )

The northern lights of Earth are more than just dazzling light shows — they also generate their own strange applause too, a new study reveals.

The results vindicate folktales and reports by wilderness travelers, which have long described sounds associated with the northern lights (which are also known as the aurora borealis).

"In the past, researchers thought that the aurora borealis was too far away for people to hear the sounds it made," Unto Laine, from Aalto University in Finland, said in a statement released today (July 9).

"This is true," Laine added. "However, our research proves that the source of the sounds that are associated with the aurora borealis we see is likely caused by the same energetic particles from the sun that create the northern lights far away in the sky. These particles or the geomagnetic disturbance produced by them seem to create sound much closer to the ground."

Laine and his colleagues determined the location of the clapping noise by comparing sounds captured by three microphones set up at a site with high auroral activity. Simultaneous measurements made by the Finnish Meteorological Institute showed a typical pattern of northern lights episodes at the time, researchers said.

Aurora sounds don't occur during every northern lights outburst, and they're usually brief and faint, requiring careful listening and a minimum of background noise to be heard.

Scientists still aren't sure exactly how the auroral sounds are created. They can be quite variable, ranging from claps and crackles to muffled bangs and sputtering sounds. Because of this sonic diversity, several different mechanisms might be at work, researchers said.

Auroras have captivated skywatchers for thousands of years. They result when charged particles from the sun collide with molecules in Earth's atmosphere, generating a glow. Earth's magnetic field lines funnel these particles over the planet's poles, causing the northern lights in the Northern Hemisphere and the southern lights, or aurora australis, in the south.

The new study will be published in the proceedings of the 19th International Congress on Sound and Vibration, a conference that's meeting in Vilnius, Lithuania from July 8 through July 12.

Editor's note: If you have an amazing northern lights photo you'd like to share for a possible story or image gallery, please contact managing editor Tariq Malik at tmalik@space.com.