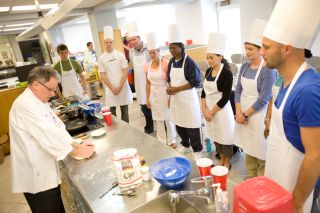 During their mission, the 'astronauts' will not only take detailed surveys on all their meals, but will pursue space mission-related research of their own.
(Image: © Cornell University)

ITHACA, N.Y. — Among the many difficulties of sending people to Mars, the question of what they will eat is not the least of them.

Scientists are preparing to send six people on a mock mission to the Red Planet to study how best to feed astronauts en route and once they arrive. The six crewmembers will live inside an ersatz space habitat in Hawaii for four months, eating a mix of instant foods and self-cooked meals made from shelf-stable ingredients.

The "astronauts" will fill out detailed food surveys to track their enjoyment of the foods, as well as their health and emotional states.

"What they’ve found is that astronauts tend to come back from space underfed — they lose weight; they're just not eating enough," said one of the study's leaders, Kim Binsted of the University of Hawaii at Manoa. "Part of it is they're not finding the food appetizing enough."

The researchers hope to identify foods and cooking methods that could keep astronauts well-fed for an extended mission. They've already selected eight finalists, and must narrow it down to six prime and two backup crewmembers before they begin their stint on "Mars" in early 2013.

Getting to know each other

The finalists met last week here at Cornell University, home of another of the study's leaders, Jean Hunter, a professor of biological and environmental engineering. The would-be astronauts spent a few days getting to know each other, taking cooking lessons from a Cornell hotel school chef, and going through checkouts like a test of their "nasal patency," or smell. [Photos: Mock Astronauts Take Cooking Lessons for 'Mars']

"I love space exploration and I love food. I just found it very appealing, becoming a space chef," said one of the finalists, nanomaterials scientist Yajaira Sierra-Sastre, who originally hails from Puerto Rico.

The researchers put out a call for applicants in February 2012, and were overwhelmed by the response, receiving 700 submissions for the project, called the Hawaii Space Exploration Analogue & Simulation (HI-SEAS). Of those 700 applicants, about 150 had all the qualifications, which included a science background and other skills that generally make them "astronaut-like," the better to simulate the lifestyles and diets of real astronauts.

In fact, the mock mission may have to be pushed back a few weeks to allow three of the finalists, who also applied to be NASA astronauts, attend interviews if selected.

"Frankly I think they have a good chance, at least of making it to the interview stage," Binstead told SPACE.com.

The finalists have a range of backgrounds: Some are studying for Ph.D.s in space-related fields, some are science communicators and educators, and one is a stay-at-home mom and former Navy helicopter pilot.

"I live on a sailboat, so when they said 'confined spaces,' I said 'no problem,'" said Crystal Haney, the former pilot and current mom, who also runs her own personal training business.

In addition to studying how food affects astronauts' health and productivity, the researchers will also be looking into its affect on morale.

"I'm curious about how important meal time will be and how that can really help the morale of the crew," said another finalist, science journalist Kate Greene. "When you look at how space travel plays out, it's about the people as much as about the technology, and food is about people."

The scientists will be comparing the effects of instant meals versus those the crew cook by hand.  [Space Food Photos: What Astronauts Eat]

"There's a huge social aspect of preparing food together, preparing for special occasions," Binstead said. "It's very stress-relieving as well. We have the hypothesis that cooking is going to be more satisfying in a lot of ways."

However, whether cooked foods are sufficiently preferable to pre-prepared foods to overcome the greater cost and effort that goes into them is one of the team's open questions.

While on their mission, the crew will be posting lists of ingredients for their meals and soliciting recipe suggestions from the public. The setup will simulate the Mars base they may find themselves on, and not the spaceship used to transport them there. Thus, they will have a small oven, microwave and other kitchen basics. However, they will be using no foods that require refrigeration.

During the mission, each of the crewmembers will also be carrying out research of their own on topics ranging from the best exercise equipment to take to space, to designing antimicrobial socks for space travel, to improving the efficiency of space mission design.

Angelo Vermeulen, a Belgian biologist and artist, will be studying space habitat design.

"People are not robots," he said. "A habitat has to be more than a mechanical environment that keeps people alive. It's one of the big challenges of a mission to Mars."

If all this sounds appealing to you, take heart. The researchers are planning several more iterations of the study in the future, so more chances to take a mock trip to Mars await.