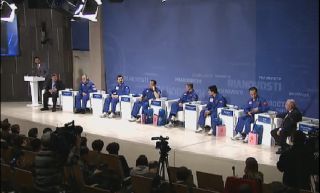 After enduring 520 days of isolation from the rest of the world as part of a simulated journey to Mars and back, six volunteer astronauts are enjoying their "return" to Earth, following the successful completion of their mission.

The so-called Mars500 project came to an end on Nov. 4 after the six participants were released from a pretend spacecraft they'd lived in for nearly a year and a half. The elaborate experiment, which was the longest spaceflight simulation ever conducted, aimed to replicate a manned mission to Mars from beginning to end.

"VERY happy to be back on earth," Italian engineer Diego Urbina, one of the Mars500 participants, said via Twitter on Sunday (Nov. 6).

After emerging from their mock spacecraft, which was a special isolation facility housed at the Russian Institute for Biomedical Problems in Moscow, the Mars500 participants spent four days in medical quarantine. The crew members addressed reporters in Moscow today (Nov. 8) during a news conference hosted by the Russian news agency Ria Novosti.

The six participants embarked on the simulated journey in June 2010. Scientific research and medical tests were conducted throughout the experiment, and scientists will use this data to assess the physical and psychological challenges that astronauts will face on long space missions, such as to Mars or an asteroid.

"The international crew of the Mars500 experiment has completed the 520-day experiment," Mars500 commander Sitev reported to project officials after the hatch to the pretend spacecraft was opened. "The program has been fully completed. All the crew members are in good health. We are ready to continue the investigations."

The $15 million experiment was carried out by the European Space Agency and Russia's Institute of Biomedical Problems.

Researchers will now sift through the wealth of data collected from the Mars500 project before determining how best to conduct follow-up experiments, officials at the European Space Agency have said.